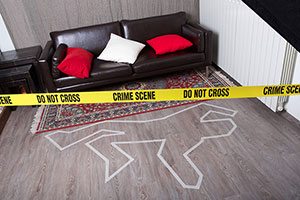 Some unusual witnesses may be appearing in murder cases these days — including a “filthy mouthed” parrot and a robot butler.

As the Daily Mail reports, Michigan woman Glenna Duram, 45, is charged with first-degree murder in the death of her husband in May of 2015.

After her husband was shot, she allegedly turned the gun on herself but survived.  She spent months in the hospital recovering.

The only witness was the couple’s African grey parrot, Bud. Weeks after the husband’s death, his family recorded the bird saying what they believed were the husband’s last words: “Don’t f-ing shoot!”

Police said they found three suicide notes she had left in the house.

The prosecutor said he hasn’t ruled out putting the parrot on the witness stand.

Do I hear an Echo?

In another murder case, as the New York Times reports, detectives investigating a murder in Arkansas are seeking access to audio recordings that may have been made by an Amazon Echo device at the scene of the crime.

Victor Collins was found dead in November, 2015, in a hot tub at the home of James Bates.

The home showed signs of a struggle, including blood spots and broken bottles. Bates was charged with murder.

In the kitchen of the home was an Amazon Echo.

An Echo is a tubular device that can play music, serve as a speakerphone, read audiobooks, control lights and thermostats, check the weather, traffic, and sports scores, and perform various other functions.

The Echo is voice-activated, has seven microphones, and can hear users up to 20 feet away.

The Echo uses a “wake word” and records only what is said after it’s been activated. Once it’s activated, it streams what it records to the Cloud. The audio is then stored by Amazon until a customer deletes it.

The police have sought from Amazon “electronic data in the form of audio recordings, transcribed words, text records and other data” that the Echo may have captured.

Amazon has said that it “objects to overbroad or otherwise inappropriate demands.”

The Internet of Things

Marc Rotenberg, president of the Electronic Privacy Information Center, told the Times that there should be a “clear legal standard that governs law enforcement access” to the “internet of things.”

The “internet of things,” (IoT) according to Forbes,

is the concept of basically connecting any device with an on and off switch to the Internet (and/or to each other). This includes everything from cellphones, coffee makers, washing machines, headphones, lamps, wearable devices and almost anything else you can think of.  This also applies to components of machines, for example a jet engine of an airplane or the drill of an oil rig.

According to the Gartner research firm, by the year 2020 over 26 BILLION devices will be connected to the internet of things.

Others say the number will be 100 billion.

According to an expert quoted in the Times, “The lack of clear-cut legislation over who is legally entitled to the data from such devices means these kinds of cases will continue to surface.”