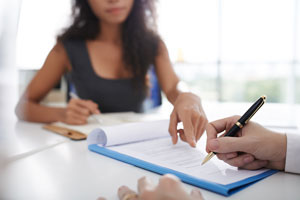 The Sixth Amendment to the United States Constitution entitles all people who are charged with a crime to the assistance of a lawyer. Criminal defendants who cannot afford a lawyer are entitled to appointed counsel if they meet a state’s standards of indigence. While many defendants fall through the cracks — they earn too much to qualify as indigent but they lack the savings or borrowing ability they need to hire a private lawyer — the justice system at least assures that the poorest members of society receive legal representation in criminal cases.

Civil litigants lack the same constitutional right to a lawyer, even when the potential consequences of civil cases may be more devastating than a criminal conviction. Civil proceedings that may lead to the termination of parental rights, an eviction, a foreclosure, or an involuntary commitment might have a more severe impact on a life than the modest fine that follows many misdemeanor convictions. Yet in many states, low-income individuals are forced to represent themselves in serious civil matters.

A Shortage of pro bono Representation

State bar associations often encourage lawyers to provide pro bono services to the poor. In other words, attorneys are asked to provide their services without a fee. Many lawyers do so on at least an occasional basis. The Legal Services Corporation (LSC) also funds lawyers for low-income Americans who need help with legal issues involving housing, family law, government benefits, and consumer issues.

Unfortunately, those programs (and others that are served by volunteer lawyers) fall well short of serving all the low-income individuals who need legal help. Using the 2015 federal poverty guidelines, an individual earning more than $14,713 would not qualify for LSC assistance, yet few workers who earn $15,000 can afford to hire a lawyer.

The LSC notes that “legal aid offices turn away 50 percent or more of those seeking help.” More than 80% of low-income people do not obtain the legal representation they need in civil cases.

The Associated Press reports that 18 states are considering or have recently adopted legislation that would provide more lawyers to the needy. In some cases, the proposals would compensate private lawyers who help the poor in selected cases. In other cases, the state’s public defender system would expand to provide services in certain non-criminal cases (such as civil commitments).

According to the AP article, proposed legislation in three states would provide lawyers to individuals who are facing involuntary commitments due to substance abuse. A fourth state passed a law that will give appointed counsel to indigent individuals who have been civilly committed, whenever the state is requesting a renewal of that commitment.

While civil commitments are viewed as benevolent rather than punitive, they still involve a loss of liberty. Many states already provide counsel to indigents who are facing civil commitments. Some also provide a right to counsel in guardianship proceedings that may impose significant restrictions on liberty.

Two states are contemplating legislation that would provide low-income parents with counsel when they are facing a loss of their parental rights. Several states already recognize that lawyers provide a crucial safeguard against the unjust termination of a parent’s relationship with a child. The appointment of counsel gives indigent parents a better opportunity to understand how they might be able to maintain a parenting relationship with their children.

A proposed law in Massachusetts would give attorneys to low-income individuals who are facing eviction. A similar proposal in New York would cover foreclosure proceedings as well as evictions. Given the number of defenses that are available to unjust evictions (and, to a lesser extent, foreclosures), representation by an attorney can help the indigent avoid homelessness.

Finally, a new law in Oregon requires judges to appoint counsel for juveniles who are facing a sex offender registration proceeding. Being branded as a sex offender, often on the basis of consensual sex or acts committed when the offender was not yet a teenager, has the potential to destroy a life.

A Question of Funding

Whether the proposals to expand legal services for low-income individuals will be enacted by state legislatures will likely depend upon the health of the state’s budget. Public defender programs that serve low-income clients in criminal cases are perennially underfunded. Many of those programs have been forced to lay off lawyers and staff members to meet shrinking budgets. States spend substantially more on prosecutors, police, and corrections than they spend on indigent defense.

Proposals to fund legal services programs for low-income clients in civil cases are likely to encounter the same difficulties. Financially needy people lack political clout. They have trouble competing with louder voices that demand a share of state budgets and with those who urge states to lower their rate of taxation. Yet when important interests are at stake involving parenting, housing, and freedom, providing a lawyer to the needy recognizes that low-income individuals are as deserving of legal representation as those who can afford to hire counsel.

The Power of Jury Nullification
What Happens If You Break an NDA?
How Should Neighbors Resolve Property Disputes?
Law Student Sues Massachusetts School of Law After Receiving D Grade