Court Rules That Bawdy "Grinch" Play Is Fair Use 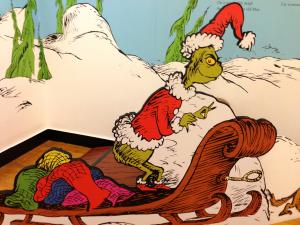 A New York federal court has ruled that a play based on the Dr. Seuss book How the Grinch Stole Christmas constituted fair use and thus did not infringe the copyright of the original children’s book.

The Grinch book was first published in 1957 and tells the story of a green creature who lives in a cave on Mount Crumpit overlooking the town of Who-Ville, home of the Whos.

The Whos love Christmas, but the Grinch hates it and decides to ruin it. He disguises himself as Santa and steals all of the town’s Christmas trees and presents.  He’s confronted by a small Who named Cindy-Lou.

When the Whos are able to celebrate Christmas even without trees and presents, the Grinch learns his lesson and returns what he stole, whereupon he’s invited to join the Whos at their feast featuring “roast beast.”

The play Who’s Holiday is a dark comedy that uses the characters, plot, and setting of the Dr. Seuss book.

The play is a 75-minute one-woman show about 45-year-old Cindy-Lou Who, who now lives in a trailer on Mount Crumpit. The character speaks to the audience only in rhyming couplets. While waiting for the guests to arrive for her Christmas party, she tells the story of her life, starting with her first meeting with the Grinch.

Her version of events includes lines like: “I watched for a while as he was stealin’ our shit I then cooed by mistake and he saw me. That twit.” The Cindy-Lou character in the play also drinks alcohol, abuses prescription drugs, and smokes “Who Hash.” She tells the audience she had sex with the Grinch when she turned 18, got pregnant, and later married him.

After Cindy-Lou cooks the family dog and the Grinch tries to abuse her, he falls off a cliff and dies. Cindy-Lou goes to prison and her daughter is put into foster care.

The author of the play, Matthre Lombardo, brought suit seeking a declaration that his play was a parody of the book and thus fair use under copyright law.

As the New York Times reported, Lombardo also sought damages of $130,000 for cancellation of his play, which was scheduled to begin performances Off Broadway.

Dr. Seuss Enterprises, which holds the copyright to the Seuss book, sent numerous cease-and-desist letters to Lombardo.  When he filed his lawsuit, Seuss Enterprises asserted counterclaims for copyright and trademark infringement.

The judge decided that the play was a fair-use parody of the book:

The Play recontextualizes Grinch ‘s easily-recognizable plot and rhyming style by placing Cindy-Lou Who – a symbol of childhood innocence and naiveté — in outlandish, profanity-laden, adult-themed scenarios involving topics such as poverty, teen-age pregnancy, drug and alcohol abuse, prison culture, and murder. In so doing, the Play subverts the expectations of the Seussian genre, and lampoons the Grinch by making Cindy-Lou’s naiveté, Who-Ville’s endlessly-smiling, problem-free citizens, and Dr. Seuss’ rhyming innocence, all appear ridiculous.

The judge then dismissed the case.

New Copyright Rule Is Good News for Filmmakers
Tinder and Bumble Spat about Who Owns the Swipe
Friday the 13th Writer Gets Rights Back from Producer
Aretha Franklin Was Paid Nothing for “Respect” on the Radio
Court Says Artists Cannot Get Royalties on Resales
Uber and Waymo Settle Trade Secret Dispute
Is Your T-Shirt Protected by the First Amendment?
Could You Go to Jail for “Borrowing” an HBO Password?
Court Says Open Source Licenses Can Be Enforced
"Spinal Tap" Lawsuit Shines a Light on "Hollywood Accounting"

Game Mods and Car Hacks Now Legal Under Copyright Law
Court Rules that Online Streaming Services Do Not Qualify for Cheap Cable License Rights
Could You Go to Jail for “Borrowing” an HBO Password?
Sons Fight over Audrey Hepburn’s Gowns and Image