What Does the Constitution Say About Gun Control? Part 2 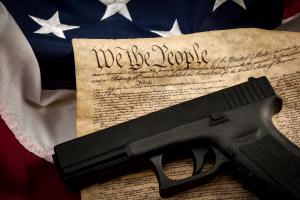 A large majority of Americans support some form of gun control, but as we saw in Part 1, political and constitutional roadblocks to regulation have made gun control legislation difficult to enact. The limits imposed by the Second Amendment, however, are not entirely clear.

As the Court explained, the Framers of the Bill of Rights did not envision the Second Amendment as “a right to keep and carry any weapon whatsoever in any manner whatsoever and for whatever purpose” The core right, according to the Supreme Court’s current interpretation, guarantees most law-abiding, mentally fit adults the right to keep a gun in a residence for personal protection. Store owners may also be entitled to keep a gun on their business premises.

The Court suggested that its interpretation of the Second Amendment does not affect longstanding regulations of the sort that prohibit felons from possessing guns or that regulate the sale of guns in commerce. Regulations that are not “longstanding” might face greater scrutiny. Any new regulations that Congress or the states pass will likely be challenged by the National Rifle Association (NRA) and its supporters as going beyond the regulation that the Second Amendment allows.

Whether new regulations are politically achievable is uncertain. From a Second Amendment perspective, it is equally unclear whether the core right discussed above might be expanded to encompass the regulations that are most often discussed.

From the NRA’s standpoint, the greatest threat to the Second Amendment is found in proposals to ban assault rifles. Even the definition of “assault rifle” is controversial. Some opponents of regulation argue that only fully automatic weapons (machine guns) are assault rifles. Private ownership of machine guns has long been banned.

Whether or not a semi-automatic weapon like the AR-15 or AK-47 should be called an “assault rifle,” it would be easy enough to write legislation banning their sale. At one point, in fact, federal law prohibited their sale. A bill to reinstate that ban has 195 sponsors in the House of Representatives. Whether the ban would violate the Second Amendment will depend on the perspective of the court that decides the question. The fact that assault rifles were prohibited once before, however, might suggest that there is no longstanding, constitutionally protected right to own one.

Some courts have upheld state regulations banning the possession of most semiautomatic rifles — the kind of weapons that are usually involved in mass shootings. The Supreme Court has not agreed to review those decisions and, in the wake of recent mass shootings, the Court is probably not anxious to stick its institutional foot into such troubled waters.

Although President Trump tweeted about the mental illness of the Parkland shooter, his tweet did not mention that he signed a law repealing an Obama-era regulation requiring the Social Security Administration to notify the FBI’s National Instant Criminal Background Check System that it has determined a beneficiary suffers from severe mental disabilities. That was before the president proposed taking guns away from mentally disturbed individuals without first providing due process, and before a meeting with an NRA representative prompted him to back away from that suggestion.

Tightening existing laws that are designed to prevent felons and the mentally ill from possessing guns would probably not violate the Second Amendment, given the longstanding nature of those laws. On the other hand, taking guns away from someone who hasn’t used them to break a law might violate the Due Process Clause of the Fourteenth Amendment if the government failed to give the gun owner a hearing before seizing the gun.

A poll by Quinnipiac University in February found that 97% per cent of Americans believe in background checks for all gun purchases. Existing law requires only licensed gun dealers to determine whether a gun buyer has been included in a federal database of felons and people with a mental illness. Sellers who make private sales at gun shows or online do not need to conduct the check, making it remarkably easy for people who cannot legally own a gun to obtain one.

Given the Supreme Court’s suggestion that “laws imposing conditions and qualifications on the commercial sale of arms” do not violate the Second Amendment, it seems unlikely that extending those regulations to private sales would do so. A sale is a commercial transaction, whether it is made by a licensed gun dealer or an unlicensed gun owner. Whether imposing such a restriction on intrastate private sales would violate the Commerce Clause is a separate question.

California imposes a 10-day waiting period on the purchase of firearms. Eight other states have enacted waiting periods of various lengths that apply to some or all guns; California’s is the second longest. The waiting period was challenged on the ground that preventing people from buying a gun the instant they want one violates the Second Amendment. The Court of Appeals for the Ninth Circuit disagreed.

The challengers asked the Supreme Court to hear their case. The Supreme Court takes only a small percentage of the appeals it is asked to hear, and it declined to hear this one. Justice Thomas dissented, arguing that the Court was treating the Second Amendment as a second-class right by refusing to hear cases like this one.

Of course, the Second Amendment does not expressly ban waiting periods. Nor does a waiting period prevent anyone from exercising the right to gun ownership. Waiting periods are generally justified as a “cooling off” period that prevents hot-headed individuals from acquiring a gun so they can shoot someone with whom they have just argued. If a “cooling off” period infringes the right to keep and bear arms, it does so temporarily and arguably with good reason.

The challengers contended that the law harms people who need a gun immediately for self-protection. Given the availability of police protection, imperfect though it may be, a legislature could legitimately conclude that the need to prevent impulsive shootings outweighs the rare instance in which self-protection is achieved by bearing a firearm.

The challengers also argued that the waiting period was not rational when applied to people who already own a gun. That argument might have some merit if the new purchase is of a gun that is similar to the firearm that the buyer already owns. However, some guns are more suitable for murder than others. A shotgun owner who wants to commit mass murder might need to acquire an assault rifle; a deer rifle owner might need a handgun if the anticipated killing is someone in their home. It may be more reasonable for government to subject all buyers to the same cooling off period than to parse evidence about the nature of the guns they already own.

States and cities have traditionally enacted laws prohibiting individuals from carrying a concealed weapon. Concealed carry laws vary widely. About a dozen states permit almost anyone who can lawfully own a gun to carry concealed firearms without obtaining a permit, although a few of those limit the right to state residents.

Most other states require individuals to obtain a permit before they can lawfully carry a concealed weapon. Those states generally establish qualifications that must be met before a permit can be issued. Qualifications may include training, passing a background check, or having a legitimate need (other than generalized fear of crime) for carrying a concealed weapon. Some states give law enforcement the discretion to veto a permit application.

Whether a blanket refusal to allow concealed carry violates the Second Amendment is an unsettled question. The federal appellate court for the D.C. Circuit held that a D.C. law requiring individuals to have a “good reason” to carry a handgun in public violated the Second Amendment. A year earlier, the Ninth Circuit reached the opposite result, holding that the Second Amendment “does not preserve or protect a right of a member of the general public to carry concealed firearms in public.” In light of the Supreme Court’s unwillingness to consider the constitutionality of cooling off periods, whether and when the Supreme Court will resolve the concealed carry conflict is anyone’s guess.

Stephen Paddock used a bump stock (a replacement rifle stock that makes it possible to fire a semi-automatic rifle very rapidly) to help him kill 59 victims in Las Vegas. Bump stocks are accessories, not arms, and the extent to which the Second Amendment protects the right to keep and bear accessories is not at all clear.

President Trump has proposed using an executive order to ban bump stocks. Presidents cannot unilaterally enact laws, but they can use executive orders to affect the enforcement of laws. A ban on bump stocks might exceed presidential authority, given that no law regulates them. An argument can be made that the law prohibiting possession of machine guns could be interpreted to apply to bump stocks, but as FreeAdvice noted, that interpretation may stretch presidential prerogative beyond its breaking point.

Legislators could likely enact a bump stock ban that would survive a Second Amendment challenge. A bipartisan bill has been introduced in the Senate to ban bump stocks, but some senators have suggested that they would prefer not to act if the President will successfully ban them with an executive order. Since legislation would provide a swifter, permanent solution to the bump stock problem, the “wait and see” approach seems like a way for senators to avoid voting on a bill that the NRA might oppose.