Can a Lawyer Ignore a Client’s Wishes to Save His Life? 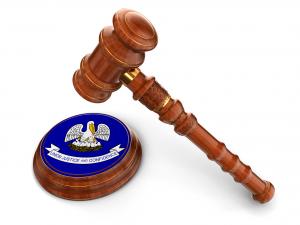 The US Supreme Court is considering whether it’s unconstitutional for a lawyer to ignore a client’s wishes in order to save his client’s life.

Robert McCoy was arrested in 2008 and charged with the murder of the son, mother, and step-father of his estranged wife.

The evidence against McCoy included the gun used in the killings, found under the seat of a vehicle in which he was traveling.

A 911 recording also included McCoy’s mother-in-law telling a person named “Robert” that her daughter was with the police, just before the sound of a gunshot ended the call.

McCoy’s car was spotted leaving the murder scene, and the phone that the mother-in-law used to call the police was also found in McCoy’s car.

McCoy’s Lawyer, Larry English, tried to get him to plead guilty, but McCoy refused.

Mr. McCoy maintained his innocence, saying that he wanted to mount a defense that he was out of town at the time of the murders and was framed by the police because he knew they were running a drug trafficking ring. Mr. English said it was Mr. McCoy’s delusions of a grand conspiracy that made his client unable to participate in his defense and that led him to believe he had no choice but to try to save his client’s life.

English told McCoy that he intended to concede McCoy’s guilt at trial. McCoy sought to discharge his lawyer two days before the trial but the court denied the motion as untimely.

The lawyer then admitted McCoy’s guilt at trial, seeking a verdict of second-degree murder on a theory of diminished capacity.

English told the jury that McCoy was “crazy.”

It is not unusual for lawyers to admit their client’s guilt, especially in death penalty cases. Usually, the strategy is carried out with the cooperation of the accused.

The jury found McCoy guilty of first-degree murder and recommended the death penalty.

The Louisiana Supreme Court denied McCoy’s appeal, finding that the lawyer’s refusal to follow McCoy’s instructions didn’t deprive him of the effective assistance of counsel or create a conflict of interest between McCoy and his lawyer.

The Louisiana Supreme Court has allowed lawyers to concede their client’s guilt over their client’s objections at least four times since 2000, according to a brief supporting Mr. McCoy filed by the Louisiana Association of Criminal Defense Lawyers and the Promise of Justice Initiative.

The issue before the US Supreme Court is whether McCoy’s counsel’s decision violated McCoy’s Sixth Amendment right to the assistance of counsel.

The Sixth Amendment to the Constitution provides:

In all criminal prosecutions, the accused shall enjoy the right to a speedy and public trial, by an impartial jury of the State and district wherein the crime shall have been committed, which district shall have been previously ascertained by law, and to be informed of the nature and cause of the accusation; to be confronted with the witnesses against him; to have compulsory process for obtaining witnesses in his favor, and to have the Assistance of Counsel for his defense.

Oral arguments in the case were heard on January 17.  The case is McCoy v. Louisiana.