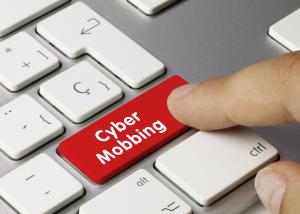 As I blogged about recently, a federal judge ruled that a lawsuit against a neo-Nazi publisher who unleashed a “troll storm” against a Montana family may go forward.

Such targeted abuse, ruled the judge, isn’t protected as free speech under the First Amendment to the US Constitution.

The publication in that case, The Daily Stormer, is also the defendant in another recent troll storm case.

As the New York Times reported, Taylor Dumpson, the African-American former president of the American University student body, sued the publisher of The Daily Stormer, as well as two other defendants, after she was viciously harassed online.

Dumpson was singled out for harassment after she became the first black woman to serve as AU’s student body president in 2017.

The day she was elected, bananas hanging from nooses were found around the campus, and the FBI was brought in to investigate.

The bananas had offensive messages written on them.

Andrew Anglin, who publishes The Daily Stormer, posted an article about the incident, along with Dumpson’s photo and personal information, on his website. He encouraged his followers to harass and bully Dumpson.

His readers subsequently sent her a barrage of racist and demeaning messages on social media.

In Dumpson’s complaint, she said that she was diagnosed with post-traumatic stress disorder and felt constantly afraid and on edge, terrified to leave her home at night.

According to the AP, Dumpson’s case was at least the third federal lawsuit filed against Anglin.

As the AP reported,

Anglin’s site takes its name from Der Stürmer, a newspaper that published Nazi propaganda. It has struggled to stay online over the past year. Domain name registration companies Google and GoDaddy yanked the site’s web address after Anglin published a post mocking a woman killed in a deadly car attack at a white nationalist rally in Charlottesville, Virginia, last August.

As ABC News reported, James Alex Fields was convicted of first-degree murder in the car attack. He faces life in prison.

Evan James McCarty of Eugene, Oregon was a college student and actor who, according to the Times, was leading a secret life online, posting hateful messages and songs under an alias. He was among those who harassed Dumpson and was named in her lawsuit.

The Lawyers’ Committee for Civil Rights Under Law, a non-profit organization formed in 1963, filed the lawsuit on Ms. Dumpson’s behalf.

He agreed to undergo anti-hate training and at least a year of counseling, complete four academic courses on race and gender issues and do 200 hours of community service related to racial justice. Ms. Dumpson’s legal team will monitor his compliance and can inflict monetary penalties if he does not comply.

Do Coke and Pepsi Have a … Read More

What Are the Legal Rights of … Read More

Class-Action Lawsuit Against Fiat Chrysler Prompted … Read More
Helping 20 Million Americans a Year for 20 Years. FREE!
How Can We Help You?