by Kimberly DelMonico on December 9, 2016

by Kimberly DelMonico on December 9, 2016 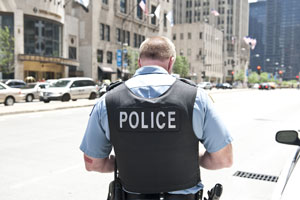 The widow of slain police officer Kevin Jordan is suing bulletproof vest manufacturer Armor Express for the failure of one of its bulletproof vests to save her husband’s life.

On May 31, 2014, Georgia police officer Kevin Jordan was working at his off-duty security job at the Waffle House when two men and a women caused a disturbance. Jordan escorted the disruptive patrons out to the parking lot. The woman, Chantell Mixon, began physically fighting with Jordan and he attempted to arrest her. While Jordan was in the process of arresting Mixon, he was shot five times. The shooter, Michael Dwayne Bowman, was later indicted on charges including murder and aggravated assault of a police officer.

According to Griffin Police Lt. Mike Richardson, at least one of the five bullets penetrated the bulletproof vest that Jordan was wearing.

Jordan, 43, was the father of seven. He was an officer with the Griffin Police Department for four years.

Jordan’s widow, Tammy Jordan, filed a lawsuit in U.S. District Court for the Northern District of Georgia against the manufacturer of the bulletproof vest, Armor Express. Armor Express has done business with the U.S. Army, Navy, and Air Force, and numerous United States and International police organizations. Armor Express markets itself as a producer of “top-quality body armor that is second to none” and notes that its “products undergo rigorous testing protocols to ensure performance that goes above and beyond expectations.”

According to the suit, the vest was designed to protect Jordan “from bullet wounds or being shot by a .40-caliber handgun in his upper, middle and low back areas.” The suit claims that the vest that Jordan was wearing “specifically physically covered” the parts of Jordan’s back where he was shot.

At the center of the lawsuit is the ballistic vest that Kevin Jordan was wearing when he was shot. Because Officer Jordan’s shooting is an open criminal case, the Georgia Bureau of Investigation will not release the information about the specific type of weapon and ammunition that was used. However, the FBI annual report on officers who were killed shows that Jordan was shot five times at close range by a .40-caliber semi-automatic handgun.

Attorney for the Jordan family, Anitra Price, stated that she was having a difficult time getting information about the vest; however, she has an upcoming appointment to view and inspect the vest at the Georgia Bureau of Investigation’s office in Midland this week.

Sam Jeffrey, a former federal law officer who is an assistant professor of criminal justice at Harding University in Searcy, Arkansas, has stated that rifle rounds can go through many of the ballistic vests that are typically worn by local police departments. The FBI has reported that 30 out of the 41 officers who were killed in the line of duty in 2015 were wearing body armor at the time of their deaths.