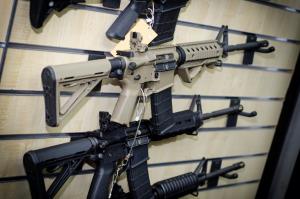 Last year, a Connecticut judge dismissed a lawsuit filed by relatives of the victims of the Sandy Hook Elementary School shooting against the makers of the assault rifle used in the attack.

This dismissal was based on a 2005 federal law that gives gun makers and sellers immunity from lawsuits when the weapons they provide are used to commit crimes.

The law is called the Protection of Lawful Commerce in Arms Act (PLCAA).

Gun makers and dealers are still liable for damages resulting from defective weapons and other acts for which they're directly responsible, but not for how weapons are used.

As the New York Times reported at the time, the law had been the number one priority for the National Rifle Association (NRA) for years.

The law was intended to end lawsuits by individuals and municipalities, including New York City, seeking to make gun dealers and manufacturers liable for negligence when guns were used to commit crimes.

The US Pentagon supported the law, saying that it was needed to "safeguard our national security" by limiting lawsuits against companies that supplied weapons to the military.

But the families of the Newtown victims are trying to find a way around the law.

As the New York Times reports, supports of the lawsuit believe that if the state Supreme Court allows the case to proceed to trial,

the gun companies’ internal communications — which the companies have fought fiercely to keep private — would surface in discovery, a potentially revealing and damaging glimpse into the industry and how it operates. It could also chart a legal road map for the survivors and relatives of victims in other mass shootings as they pursue accountability.

The PLCAA has an exception for "negligent entrustment," allowing liability when a gun is given or sold to someone who is at high risk of misusing it.

This exception has sometimes been used successfully in lawsuits against gun dealers. The plaintiffs in the Newtown case are trying to have it broadened to include gun makers as well.

Specifically, the families are trying to hold the Remington gun company responsible for the sale of the AR-15 style Bushmaster assault rifle that 20-year-old Adam Lanza used in 2012 to shoot 154 rounds in less than five minutes, killing 20 young children and six adults at the Sandy Hook school.

The AR-15 is one of the most popular, and most easily obtained, guns in America. In 2013, the National Shooting Sports Foundation estimated there are somewhere between 5 million and 8.2 million assault weapons in circulation....

The argument is that the weapon was designed for military battlefield use and should not have been available to an untrained civilian.

The suit also claims that the companies deliberately promoted the weapon with product placement in video games and macho militaristic marketing slogans that appealed to a population of mentally unstable young men — the same population that has used the gun to kill innocent people in theaters, malls, schools and churches.