Diamond and Silk Threaten to Sue Blogger for Defamation 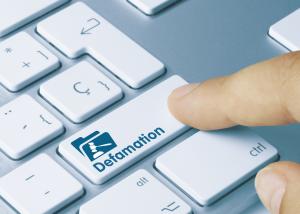 When the First Amendment was adopted, freedom of the press referred to the printing press. There was no internet in 1791. The word weblog, soon shortened to blog, did not come into existence until 1997.

As media have expanded since 1791, so has the scope of the First Amendment. Even scholars who believe that constitutional rights should not adapt to changing times tend to agree that freedom of the press applies to all forms of media. Radio and television broadcasts are not printed on a press, but they have long been protected by the First Amendment.

The First Amendment protects the right to report facts and to state opinions. It does not protect false assertions of fact.

Defamation refers to a false statement of fact, either spoken or written, about a person that causes injury to that person because of its communication to an audience. For example, if a blogger writes “My neighbor set fire to my house” without having evidence that the neighbor did so, the blogger has probably published a defamatory statement of fact — unless the neighbor actually did start the fire.

While most states impose liability for defamation when the false statement is made negligently, the First Amendment requires a higher standard of protection when the statement concerns a government official, a public figure, or an issue of public importance. In those cases, the statement will only be regarded as defamatory if it was made maliciously, with knowledge of its falsity or a reckless disregard for the truth.

A public figure is someone who enjoys “pervasive fame or notoriety.” In addition, an individual who “voluntarily injects himself or is drawn into a particular public controversy” becomes a public figure with regard to that controversy.

Bloggers therefore enjoy heightened constitutional protection when they report facts about government officials, about issues that are in the news, or about public figures. Proving malice or recklessness is so difficult that defamation lawsuits rarely succeed unless the defendant made false statements of fact about a private individual who did not participate in a public controversy.

Diamond and Silk are Lynnette Hardaway and Rochelle Richardson, a pair of video bloggers who focus on political commentary. Since the protection of political commentary is at the heart of the First Amendment, they have a constitutional right to express their opinions.

A court would likely conclude that Diamond and Silk are public figures. The Washington Examiner notes that the duo have “skyrocketed to fame.” They tour the nation in “a traveling roadshow” and were given a show on Fox Nation, the online Fox News streaming service. They were also invited to testify before Congress about alleged censorship of their views by Facebook.

Even if Diamond and Silk are not public figures for all purposes, political bloggers “thrust themselves to the forefront of particular public controversies in order to influence the resolution of the issues involved.” They deliberately “invite attention and comment.” They therefore meet the Supreme Court’s definition of limited public figures, at least when allegedly defamatory comments are related to their expression of political opinions.

Wonkette is a blog by Bianca DeLaRosa that covers news, politics, and culture. A Wonkette post referred to Diamond and Silk as “Black White Nationalists” and condemned “the way they prop up the most vile white supremacy in our government.”

The post refers to social and political opinions advanced by Diamond and Silk. The post corrects their misstatements of historical fact and advances the opinion that the bloggers are enabling white supremacy. In context, referring to Diamond and Whit as “Black White Nationalists” would likely be understood as a statement of opinion rather than a statement of fact.

As a matter of law, opinions are never defamatory. Statements of fact that are disguised as opinions, on the other hand, can be defamatory. The line between facts and opinions is sometimes difficult to draw and courts do not always draw it in the same place. Still, the First Amendment encourages robust political debate. When bloggers thrust themselves into that debate by expressing controversial opinions, they should expect other bloggers to respond in kind.

Wonkette received a “cease and desist” notice that purported to come from the “Diamond and Silk Legal Team.” The notice directed Wonkette to remove the post to which Diamond and Silk objected. Since lawyers typically sign their notices and identify the law firms for which they work — and since it would be unprofessional and possibly unethical not to do so — one might wonder whether the notice came from a lawyer at all.

The notice directed Wonkette to keep the notice a secret. Wonkette responded by publishing it on the blog. Quite correctly, Wonkette does not fear that the criticism of one blogger by another rises to the level of actionable defamation, at least when the criticism is not based on provably false facts rather than opinions.