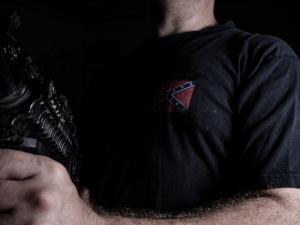 A federal judge has ruled that a lawsuit against the publisher of a neo-Nazi website may proceed.

The judge ruled that the First Amendment, which protects free speech, doesn’t necessarily shield Andrew Anglin, the publisher of the Daily Stormer, from the suit brought by a Montana Jewish woman and her family.

Anglin called on his readers to unleash a “troll storm” on Tanya Gersh, her husband, and her 12-year-old son – but he claimed that he wasn’t legally responsible for his followers’ actions.

According to the Washington Post, one emailer wrote Gersh, “You are a disgusting, vile Jew … This is OUR country: you’re merely living here (for now).”

One caller reportedly said, “You should have died in the Holocaust with the rest of your people.”

Gersh said she was especially disturbed by calls that consisted only of the sound of gunshots.

She and her family received more than 700 abusive messages, including death threats.

Anglin claimed that Gersh was trying to force the mother of Richard Spencer, an avowed white nationalist, out of the town of Whitefish, Montana in 2016.

Spencer gained notoriety when a video of him shouting “Hail Trump!” at a white nationalist rally, and the Nazi salutes in response, went viral.

Spencer’s mother owned a ski home in Whitefish.  After residents protested her son’s activities, she contacted Gersh, a realtor, about selling the house.

Later, Spencer’s mother decided not to sell. Several months after that, she published a blog post accusing Gersh of “extortion, threats, and denouncing her son’s views.”

The day after the blog post went live, Anglin called on his readers to attack Gersh.

Anglin also “doxed” Gersh and her family and friends.

“Doxing” is the practice of researching and broadcasting private information about a person or organization, often for purposes of harassment.

Gersh alleged that hundreds of people harassed and threatened her and her family online, by phone, and via email.

Anglin did not use his speech about Gersh to raise awareness for issues consonant with the alt-right agenda. Rather, construing the allegations in the complaint as true, Anglin exploited the prejudices widely held among his readers to specifically target one individual.

The judge noted that Anglin’s “morally and factually indefensible worldview” didn’t mean that he wasn’t entitled to First Amendment protections. However, his worldview also didn’t entitle him to violate the law.

The decision means that Gersh can proceed with her claims for invasion of privacy, intentional infliction of emotion distress, and violation of Montana’s anti-intimidation law.

Gersh is being assisted by the Southern Poverty Law Center (SPLC) which often deals with litigation involving discrimination and harassment.

The Southern Poverty Law Center is dedicated to fighting hate and bigotry and to seeking justice for the most vulnerable members of our society. Using litigation, education, and other forms of advocacy, the SPLC works toward the day when the ideals of equal justice and equal opportunity will be a reality.

As CNN reported, a lawyer for the SPLC said in a statement,

Today's ruling underscores what both we and our client have said from the beginning of this case — that online campaigns of hate, threats, and intimidation have no place in a civil society, and enjoy no protection under our Constitution.