The Bull, the Girl, and the Peeing Pug: Copyright Law and Sculpture 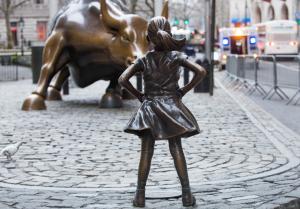 A massive bronze statue called "Charging Bull" has been a fixture near Wall Street for almost 30 years.

Many see the statue as representing a "bull market" — i.e., one in which prices are rising, encouraging buying.

A "bull" market is the opposite of a "bear" market, in which prices are falling and participants are pessimistic.

The terms are said to come from the ways the respective animals attack:  bulls thrust their horns up, while bears swipe their paws down.

The sculpture was created by Arturo Di Monica, and he registered a copyright and trademark for the eleven-foot, three-and-a-half ton sculpture.

Di Modica spent more than $300,000 to create the work as a "love letter" to New York and the US economy after the 1989 stock market crash. He installed it without a permit and it was initially impounded by the city. Eventually it was re-installed a few blocks from its original location.

Since March 7, another sculpture has been added to the scene, seemingly facing off with the bull.

The firm's stated intent, according to the New York Times, is to highlight “the power of women in leadership” and encourage “greater gender diversity on corporate boards.”

The four-foot-tall bronze girl, wearing a skirt and with her hair in a ponytail, is "attacking" the bull, according to Di Modica.

He says that the bull represents “freedom in the world, peace, strength, power and love.”

His lawyers demanded that the girl's statue be moved somewhere else.

According to the Times, Di Modica's lawyers,

accused State Street Global of commissioning “Fearless Girl” as a site-specific work that was conceived with “Charging Bull” in mind. They said that that had improperly commercialized Mr. Di Modica’s statue in violation of its copyright.

New York Mayor Bill de Blasio commented that “Men who don’t like women taking up space are exactly why we need the Fearless Girl.”

The statue of the girl was originally issued a permit for only one week, but after positive public response de Blasio said the permit was being extended, perhaps until next International Women's Day.

More recently, the Times reported that another artist placed a small statue of a urinating pug dog — called "Sketchy Dog" (or sometimes "Pissing Pug") —  near the Fearless Girl.

The dog's sculptor, Alex Gardega, told the Times that the Fearless Girl sculpture was a "publicity stunt" and "has nothing to do with feminism."

Gardega called the "Fearless Girl" statue "corporate nonsense' that "was made by a billion dollar financial firm trying to promote an index fund. It is advertising/promotion in the guise of art."

Some people reportedly kicked the dog before it was removed.