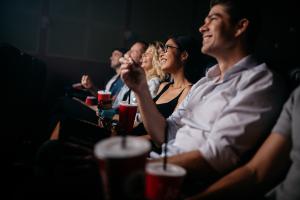 "Hollywood accounting" refers to financial practices that can make movies that earn hundreds of millions of dollars somehow end up with zero profits — or even a loss.

As The Atlantic reported,

The actor who played Darth Vader still has not received residuals from the 1983 film "Return of the Jedi" because the movie, which ranks 15th in U.S. box office history, still has no technical profits to distribute.

As NPR's Planet Money explained, each movie is set up as its own corporation. The movie corporation pays out fees to others — including the movie studios that release and distribute the movies — eliminating any profit.

Probably the most famous lawsuit dealing with Hollywood accounting was brought by writer Art Buchwald and involved the film Coming to America.

As The Hollywood Reporter noted, Buchwald won a lawsuit against Paramount for theft of a story he'd pitched that he claimed was the basis for the movie. A judge determined that he was entitled to a share of the film's profits.

The studio claimed that the movie had lost money — even though it earned $289 million on a modest budget.

As Rolling Stone reports, Harry Shearer (an actor, writer, musician, director, and producer who — among other things — voices characters for The Simpsons), filed a $125 million lawsuit against Vivendi over his work on the 1984 mockumentary This is Spinal Tap.

Shearer played a fictional bassist named Derek Smalls in the film, and also performed on the soundtrack.

He says he's only earned $81 in merchandising revenue, and only $98 for his contributions for the soundtrack.

Shearer launched a website called Fairness Rocks, in which he explains the basis for his suit.

Popular music and films make huge money for rights-owning corporations. Yet, too often, the artists and creators get a raw deal from exploitation of their talent. We want to help rebalance this equation. Vivendi reportedly told Shearer that the film "hasn't been profitable," even though it's had multiple theatrical releases, home video releases, and television showings.

According to Box Office Mojo, the movie earned $4.5 million in the US. The budget was reportedly $2 million. Although it was only modestly successful at the box office, the movie became a cult hit on home video.

The original production agreement gave Shearer and other key participants 40% of net receipts from the film.

Behind the ambitious, creative talent that is Hollywood lies a darker side of the entertainment industry little appreciated by the ordinary moviegoer. It's an opaque world of film financing, revenue accretion and minimal profit share. If exposed, as our Spinal Tap lawsuit against Vivendi aims to do, fans will no doubt be horrified at the shameful gravy train that rolls for corporate rights holders at the expense of creators.

Shearer is also seeking to recover the copyright to the film.

I discussed the issue of reversion of copyright in this blog about Paul McCartney's attempts to regain rights to Beatles songs.