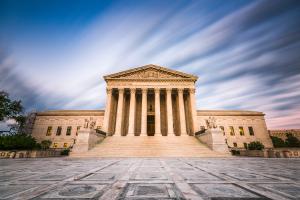 Tyson Timbs sold $225 worth of heroin. As a consequence, local law enforcement officials in Indiana seized his $42,000 Land Rover.

The US Supreme Court is now considering whether that was excessive.

The state of Indiana seized the vehicle under a law that allows it to seize vehicles used to transport drugs.

Timbs was himself a drug addict as well as a small-time drug dealer. He bought the car with the proceeds from his late father’s life insurance.

As the New York Times reported, Timbs sold drugs to buyers who were undercover police officers. He pleaded guilty to one of the sales and was sentenced to a year of house arrest and five years of probation. He was also required to pay $1,200 in fines.

The maximum fine he could have been ordered to pay was $10,000 – less than 25% of the value of the vehicle that was taken from him.

In a response to a petition in 2017, Supreme Court Justice Clarence Thomas asked the question of “whether modern civil-forfeiture statutes can be squared with the Due Process Clause and our Nation’s history.”

As Justice Thomas explained in that case,

Modern civil forfeiture statutes are plainly designed, at least in part, to punish the owner of property used for criminal purposes. … When a state wishes to punish one of its citizens, it ordinarily proceeds against the defendant personally (known as “in personam”), and in many cases it must provide the defendant with full criminal procedural protections. Nevertheless, for reasons discussed below, this Court permits prosecutors seeking forfeiture to proceed against the property (known as “in rem”) and to do so civilly.

These civil cases against the property “often lack certain procedural protections that accompany criminal proceedings, such as the right to a jury trial and a heightened standard of proof.”

As the American Civil Liberties Union (ACLU) notes, civil forfeiture is “big business” for police departments that use seized assets to pad their budgets. According to the ACLU,

The Institute for Justice, a libertarian public interest law firm, estimates that in 2014 alone the Department of Justice took in $4.5 billion in forfeited assets. The assets taken in annually by local and state police departments are doubtless even higher.

The ACLU has been able to help some people recover their property that was wrongfully seized.

According to Timbs’s lawyer, who works with the Institute of Justice, the burdens of civil forfeiture fall disproportionally on the poor.

Timbs won his initial challenge to the seizure in Superior Court, and an appeals court agreed, but the Indiana Supreme Court ruled against him, saying that the US Supreme Court had never ruled on whether the excessive fines clause of the Eighth Amendment to the US Constitution applies to the states as well as to the federal government.

Based on their questioning of Indiana’s solicitor general, the justices seem likely to rule determine that the Eighth Amendment does apply to the states and prohibits excessive fines.