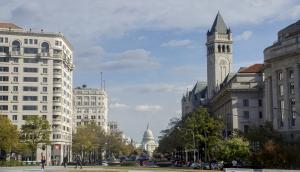 The tense, rocky, and dramatic start to Donald Trump’s presidency took another divisive turn when state and federal lawmakers filed lawsuits against the President for alleged violations of the Constitution stemming from his ownership of private businesses.  The lawsuits focus on income generated from foreign governments by Trump’s private business holdings, and accuse the President of favoring use of his companies for a number of state functions in order to earn personal profit.  The White House has maintained that the president’s connection to the businesses he managed before taking office is Constitutional, setting the stage for a legal battle to play out in federal court.

Two separate lawsuits from high profile Democrats have been filed against President Trump for his business holdings, specifically focusing on hotel and restaurant chains owned by the President’s private holdings which are used to host foreign dignitaries for state events.

The first suit, filed by the Attorneys general of the District of Columbia and the state of Maryland, accuses the President of breaking his promise to separate his public obligations from his private business interests, and argues that the money his private holdings have generated during his term in office have “deeply enmeshed [the President] with a legion of foreign and domestic government actors” which threatens the U.S. political system because it is unclear if Trump is acting in the country’s best interests, or his own.

Perhaps more notably, close to 200 Democrats in Congress have filed their own lawsuit against President Trump citing concerns about his private business holdings influencing or interfering with his public obligations to the country.  According to the congressional lawsuit, the President is violating the constitution by taking gifts and benefits from foreign leaders through his private business holdings without consent from Congress.  Like the lawsuit filed by DC and Maryland, the one from Congressional Democrats expresses concern that President Trump’s private business interests could compromise his ability to make decisions which advance American interests, particularly if the two should conflict.

Both lawsuits accuse the President of alleged violations of a relatively unknown clause in the constitution known as the Emoluments Clause, which was included by the founders in part to alleviate concerns about foreign powers interfering with American affairs by using private gifts or benefits conferred on officers of state, including the President.

The Emoluments Clause, found in Article I of the Constitution, reads, “No Person holding any Office of Profit or Trust under [the United States], shall, without the Consent of the Congress, accept of any present, Emolument, Office, or Title, of any kind whatever, from any King, Prince, or foreign State.”  Generally, the provision is seen as a prohibition on anyone who holds political office from accepting financial benefit from foreign powers, but its application to private businesses held by presidents is a bit murky.  There is a long recorded history of US presidents, including George Washington, who retained private business holdings which transact with foreign powers while in office and, unlike Trump who is part of an ownership trust, have directly managed them while serving the country.

Further complicating the lawsuits is the issue of whether or not either of the plaintiff parties actually has legal standing to file their case.  Any plaintiff who files a lawsuit must show that they have suffered a legally recognizable harm to their person or interests, and there is legitimate doubt about whether or not the state of Maryland or District of Columbia, or the members of Congress can show sufficient injury to justify a lawsuit.  Maryland and DC have attempted to achieve standing in part by saying public venues — such as convention centers — are in direct competition with Trump owned hotels and businesses to host affairs of state, and the President’s use of his own businesses harms theirs.  The Congressional lawsuit argues that members of Congress have special standing because the legislative branch alone is allowed to approve gifts or benefits to government officials, and Trump is subverting the Constitutional system of checks on executive power by engaging in business transactions with foreign entities.

Of the two, the standing argument advanced by Congressional Democrats seems more likely to succeed, but even that faces steep odds of success.  The President’s use of his own hotels to host state affairs and foreign dignitaries may raise a few eyebrows across the country, but seems unlikely to reach levels of harm sufficient to justify standing.

Although the Whitehouse has not formally responded to either lawsuit, a state from press secretary Sean Spicer dismissed the legal action as political posturing.  Pointing out that only Democrats have joined with the legal action, Spicer told reporters that it is “not hard to conclude that partisan politics may be one of the motivations.”  The administration has filed a response to a similar lawsuit filed by private businesses who allege harm to their restaurant and hotel operations because of Trump’s private interest by hammering the standing issue, and attorneys for the President will likely focus on that in motions to dismiss these lawsuits as well.  The cases were filed in federal court, and await the responses from President Trump’s team before moving forward.