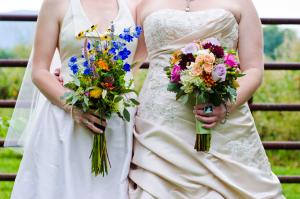 A florist in Washington State has lost her legal challenge to a law requiring her to provide flowers to same-sex couples. The Washington State Supreme Court ruled that the state had a strong interest in protecting rights of the LGBT community by barring discriminatory practices carried out by local businesses which the florist’s legal argument against the law did not overcome. Although the case is unlikely to reach the US Supreme Court, it does represent a growing trend in American jurisprudence in which similar laws across the country are upheld by state courts.

The State of Washington has a law which prohibits “public accommodation(s)” from discrimination on the basis of sexual orientation, which means that businesses in the state cannot refuse service to customers because they are LGBT. Barronelle Stutzman, owner of Alrene’s Flowers and Gifts, came in conflict with the law when she refused to provide wedding flowers to Robert Ingersoll because his partner, Curt Freed, is a man.

Stutzman, who is a Southern Baptist, argued that her sincerely held religious beliefs include a belief that marriage is reserved for heterosexual couples, and as such she could not provide a floral arraignment to a ceremony she felt was a violation of her religious principles. Stutzman provided Ingersoll with a phone number of a florist who was willing to provide flowers to a same-sex marriage, but argued that her beliefs prevented her from doing more because providing services for the ceremony would be the same as endorsing marriage equality for same-sex couples.

Ingersoll and Freed testified that they were so distraught after Stutzman’s refusal that their wedding plans resulted in a more modest ceremony due to fear that other vendors would similarly discriminate and that the public attention brought about by their case would attract protestors. Ingersoll filed a lawsuit against Stutzman for her refusal to serve them, and the State filed an accompanying complaint for a violation of the Washington Law Against Discrimination (WLAD). Stutzman responded to the lawsuits by arguing that the law violated her state and federal constitutional right to free exercise and freedom of speech.

The trial court ruled against Stutzman, finding that she violated the WLAD and that none of her state or federal constitutional rights were violated by the Washington law. Stutzman appealed the decision to the Washington Supreme Court, advancing the same state and federal constitutional arguments she did at the lower court level. Like the trial court, the Washington Supreme Court was unconvinced and held that the WLAD did not violate Stutzman’s right to free speech or right to free exercise of religion.

According to the Court, providing floral arrangements for weddings is not considered speech or expression to the standards of first amendment protection. While the Court acknowledged some artistry involved in producing flowers for weddings, it found that florists are not endorsing or making any message regarding same-sex union by providing flowers for a marriage, and therefore Stutzman was not being compelled to engage in any type of speech. Without being compelled to speak or engage in conduct which qualifies as protected speech, Stutzman’s first amendment rights were not violated.

While addressing Stutzman’s free exercise claim, the court dismissed her argument that the law was not generally applicable by pointing out that its few exemptions — put in place for religious organizations which would not officiate same-sex marriages — were not designed to apply broadly to all religious business owners. The Court also ruled that the law was neutral because it did not target one religion, and as such found that Washington’s “compelling interest in eradicating discrimination in public accommodations” outweighed any discomfort business owners like Stutzman felt over a conflict between the WLAD and their personal beliefs.

Washington is one of more than 20 states which prohibit discrimination based on sexual orientation, and legal challenges in several of these states – notably Colorado (baker could not refuse to make a cake for gay couple), New Mexico (wedding photographer could not refuse to work a same-sex marriage case), and Kentucky (t-shirt maker challenging law compelling them to provide shirts for gay pride parade) – have generally come down in favor of same-sex plaintiffs alleging unlawful discrimination.

Courts have consistently held that states have a rational interest in preventing discriminatory practices, and so far none of the defendants have demonstrated that providing services to a same-sex couple their violates their constitutional rights. Courts have ruled that a state law which forces business owners to serve gay clients neither compels speech nor inhibits the free exercise of religion, and as such the judicial trend is once again in favor of LGBT rights. Because much of the activity on this issue has been relegated to state courts, it is unlikely the Supreme Court will get involved any time soon. However, state laws specifically allowing discrimination against the LGBT community by business owners (such as one passed in Mississippi last year) may elevate the discussion to the federal level. As LGBT activists and anti-gay organizations continue to butt heads in legislative halls across the country, legal skirmishes over gay rights will continue with anti-discrimination laws looming as the next significant battleground.