How Should You Respond to a Red Light Camera Ticket? 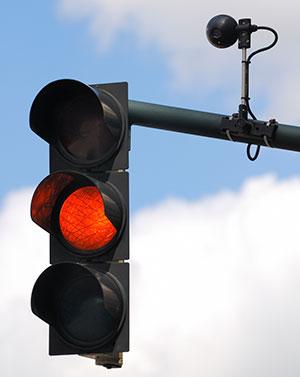 Drivers who enter an intersection on a yellow light do not always make it through the intersection before the light turns red. An unsuccessful attempt to beat a red light will sometimes draw the attention of a police officer, who will probably write a ticket. Guilty drivers usually pay the ticket because they assume (perhaps correctly) that a judge will believe the officer’s firsthand observation of the red light violation.

Police officers can’t be everywhere, however, and while they occasionally concentrate on traffic violations (usually in a well-publicized effort to send a message to traffic scofflaws), their time is better spent pursuing violent criminals. Still, traffic fines are a significant source of revenue to municipalities. Rather than hiring more officers to write more tickets, some local governments have invested in red light cameras.

The Hill recently published a commentary suggesting that red light tickets undermine the rule of law. Red light cameras are a convenient way for municipalities to make money, but they also cause penalties to be imposed upon innocent vehicle owners.

It is not unusual for transportation authorities to rely on traffic cameras to monitor congested roads and highways. Those cameras send video in real time to a monitoring center.

Red light cameras, on the other hand, take still photographs of cars that remain in an intersection after a light turns red. Different jurisdictions make different decisions about how long the light must be red before the camera is activated.

The photograph shows the front license plate. It may or may not show the driver. Most municipalities that use red light cameras assume that the car’s owner was the driver and place the burden on the owner to identify the driver if the owner denies driving the car at the time the picture was taken. Some of those municipalities will still hold the owner accountable unless the identified driver pays the ticket.

Not surprisingly, red light cameras are championed by the companies that sell them. While those companies claim that the cameras are popular, the companies oppose referenda that would allow voters to decide for themselves whether a local government should authorize their use. When lawsuits to keep that question from being included on a ballot are unsuccessful, voters overwhelmingly oppose using cameras to issue tickets for red light violations.

One of the leading red light camera companies, Redflex, was accused of bribing officials in Chicago to win an ongoing contract to operate the cameras. After first paying its law firm to investigate (Quarles and Brady unsurprisingly reported that it found no significant problems), a newspaper investigation prompted the company to pay a different law firm (Sidley Austin) to dig deeper. When the firm confirmed the corporation’s misconduct, Redflex fired a few executives and announced that the problem had been solved.

Since local governments depend on tickets for revenue, they have a vested interest in keeping red light cameras in place. Sacramento County recently reinstated red light cameras after approving a new contract with Redflex, notwithstanding the company’s checkered history, presumably because the company hopes to make more than $2 million per year from red light tickets.

Some states classify red light violations as traffic crimes, while others regard the violations as civil forfeitures. The distinction makes a difference.

Criminal charges trigger all the protections of the Constitution, including the right to confront an accuser. When the accuser is a camera, cross-examination becomes problematic. Cameras, after all, cannot answer questions.

Whether pictures from a camera constitute the kind of “testimonial statements” made outside of a courtroom that trigger the right to confrontation is unclear. In light of Supreme Court precedent, it is reasonably clear that an officer’s testimony that the camera is accurate, based on what the officer was told by a company like Redflex, violates the Confrontation Clause. The officer has no actual knowledge of the camera’s accuracy, and company technicians who might have such knowledge rarely come to court to testify.

Constitutional defenses are less likely to succeed when the red light ticket is a civil violation to which criminal protections do not attach. One federal court rejected a claim that presuming the owner is also the driver violates due process, because (the court held) the assumption is rational.

A Fourth Amendment case now before the Supreme Court, challenging a police officer’s assumption that a driver likely had a suspended license because the license of the car’s owner had been suspended, might inspire courts to reconsider the rationality of assumptions that a car’s owner is likely to be its driver. Since the Fourth Amendment standard and due process standards differ, however, it is difficult to predict how lower courts might apply the Supreme Court’s reasoning to red light tickets if it finds that an officer violates the Fourth Amendment by stopping a driver simply because the owner’s license is suspended.

When legal defenses do not prevail, ticketed drivers can always base a defense on the facts, particularly if they were not driving. Depending on how the burden of proof is allocated, an accused driver might prevail on a factual defense even if the driver was driving. The picture taken by the camera, for instance, might not display the full license plate with clarity.

In some jurisdictions, prosecutors are not prepared to prove red light violations and automatically dismiss tickets when the defendant comes to court with a lawyer. A traffic lawyer may be able to identify other defenses that will help the accused avoid a costly penalty.