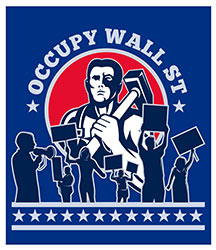 Across the globe in 2011 and 2012, Occupy Wall Street protesters took to the streets to voice concerns over corporate power, social and economic inequality, and corporate influence in the democratic process—to put it simply. The movement spread like wildfire, with varying levels of police reaction from hands-off to blatant aggression. Now, the movement has simmered, but a new lawsuit brings Occupy back to headlines with allegations that police displayed misconduct against civilians during the protests.

Five New York elected officials, along with a number of Occupy participants, several journalists, and the National Press Photographers Association, are suing New York City, JP Morgan Chase, the NY Metro Transit Authority, and others, for civil rights violations. The lawsuit claims that members of NYPD and others acting under the state violated First, Fourth and Fourteenth Amendment rights including freedom of speech, assembly, and of the press; as well as committing false arrest, unreasonable search and seizure, excessive force, false imprisonment, and malicious prosecution.

Specific cases of harassment are noted in the lawsuit and in some instances, police are accused of arresting and detaining protestors and journalists without valid charges, of using unnecessary force during arrest, of not following procedure and not finding probable cause when they should have. The list of claims are quite long, meaning the controversial lawsuit will likely be an arduous one.

JP Morgan Chase’s role involves a large, unprecedented donation of millions of dollars apparently given to the NYPD in 2010, tying the two entities together and insinuating a motive for police to act against protesters. These allegations are also included in the lawsuit, according to reports.

Plaintiffs are seeking compensatory and monetary damages of an undisclosed amount, along with an order to force the New York police to allow peaceful protests to proceed unimpeded in the future.

Plaintiffs will have the burden of proof to show that police and others are guilty of these charges. Given the widespread use of photography and video at the protests, available evidence will likely not be scarce, but it will still be challenging to prove that police behavior was a hard and fast violation of civil rights. More plaintiffs could still come forward and the lawsuit has potential to become a media blitz further pitting government and corporations against the general public.