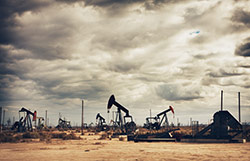 The Environmental Protection Agency is tasked with researching, monitoring and enforcing clean air, water and land standards, and states depend on the EPA to address they issues head-on. One of the agency’s most significant regulations is known as the Clean Air Act, which is concerned, among other exploits, with harmful emissions from cars, boats, factories, and from industrial drilling. But some states are saying that the EPA is not doing its job and letting methane emissions from oil and gas extraction go unattended.

Seven Atlantic states—New York, Vermont, Connecticut, Delaware, Maryland, Massachusetts, Rhode Island and Vermont—are now bringing a lawsuit against the EPA for violating the Clean Air Act. They claim that nearby states such as Pennsylvania, West Virginia and Ohio, all states that maintain considerable oil and gas drilling industries, are not being regulated well enough to curb dangerous greenhouse gas emissions like methane.

New York Attorney General Eric T. Schneiderman, along with the Environmental Defense Fund, say that although some measure have been taken to address said emissions by 2015, not enough is being done, reports the Huffington Post.

On the other end of it, the American Petroleum Institute argues that companies in many states are already installing updated equipment that meets EPA standards, and that the lawsuit is unnecessary.

Individual citizens, states, municipalities, businesses or non-profit entities, all have the ability to bring suit against the EPA for not properly governing environmental issues. Because many issues—such as contaminated water, factory emission, or unattended pollution—result in harm to the public, there have been a number of publicized lawsuits involving the EPA in recent years. Some of them include:

In order to sue a government agency in federal court, the Plaintiff must have standing; meaning, they must be able to show that an injury was caused, that there was causation (i.e., the Defendant caused the harm), and redressability (the ability to correct the situation to appease those harmed). The more people involved, the easier it may be to prove these elements; lawsuits brought by states or in class actions are typically more successful than those brought only by one person. It is more common for these types of suits to be brought on behalf of a larger number of people or companies.

In these types of civil lawsuits, it is not the goal to obtain damages for a loss or injury, necessarily, but instead to take legal action to force the EPA to address the environmental issue. The goal is not only to redress for injury, but to prevent future harm. Often these suits result in an injunction order, requiring that the Defendant (the EPA) take certain corrective actions; if the states do not prevail, however, the EPA will not be required to take action, but may do so anyway given the public display of disapproval of their work on this particular affair.