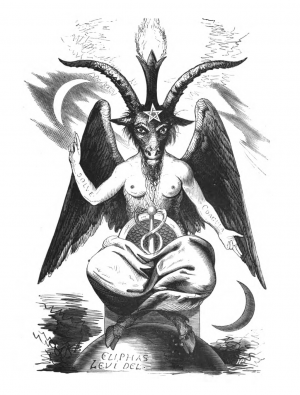 The Satanic Temple has settled its copyright infringement lawsuit against Warner Bros. and Netflix involving the Temple’s goat-headed statue of Baphomet.

The statute, which includes two children looking up at the goat-headed hermaphroditic deity, was designed five years ago and is based on an 1856 drawing by a French occultist.

A similar statue appeared in The Chilling Adventures of Sabrina Netflix series, representing the character of the “Dark Lord” who fights the teenage half-witch Sabrina.

The Temple is based in Salem, Massachusetts – home of the infamous Salem Witch Hunts of the 17th century. Its mission statement includes “reject tyrannical authority” and “encourage benevolence and empathy among all people.”

Among other things, the Temple sponsored a billboard in Texas that opposed the corporal punishment (paddling) of children in schools.

The co-founded of the Temple has also spoken out against white supremacy, saying that racism is antithetical to the values of Satanism.

The statue, which cost about $100,000, is meant in part as a protest to the installation of other religious statues and monuments on public property. It has become a sort of logo for Satanists, according to the Times.

In 2015, the Temple tried to get its Baphomet statue installed at the Oklahoma State Capitol after the state erected a monument to the Ten Commandments.

The Temple used the statue to protest a similar Ten Commandments monument at the Arkansas Capitol, as I blogged about a few months ago.

Under the First Amendment, “Congress shall make no law respecting an establishment of religion, or prohibiting the free exercise thereof.”

This has often been interpreted by the courts to prohibit religious installations on government property.

The Sabrina series, produced by Warner, is based on the Archie comic books of the same name. The character first appeared in 1962.

The Temple sued in November in Federal District Court in New York, seeking at least $50 millions for alleged copyright and trademark infringement and injury to the Temple’s reputation, as the New York Times reported.

The Temple claimed that the series damaged its reputation by portraying the statue as evil. It appears in the school that the character of Sabrina attends.

As USA Today reported, the complaint alleged that the use of the statue in connection with a fictional school “associated with evil, cannibalism and possibly murder” would be injurious to the Temple’s business.

As part of the settlement, the Temple will be acknowledged in the credits for the show.

The rest of the settlement terms, including any financial settlement, were not disclosed.

Los Angeles to Ask Supreme Court to Overturn Homeless Property Decision
Legal News Roundup: 2014 Welcomes New Abortion and Marijuana Laws
When Do Undocumented Immigrants Have the Right to a Hearing?
Which states have motorcycle helmet laws?