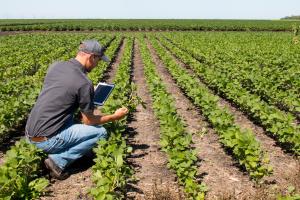 A bill introduced in Oregon would give farmers the right to sue the owners of patents for genetically modified organisms (GMOs) when those GMOs end up in their fields.

According to the East Oregonian, a farmer who supports the bill said:

Creeping bentgrass that’s genetically engineered to tolerate glyphosate herbicides escaped control in Eastern Oregon, and the crop’s patent holder should be responsible for control costs as it spreads.

According to US News, other Oregon bills that would have allowed local government to regulate genetically engineered crops recently failed.

This is the flip side to cases by plant patent owners, such as Monsanto, against farmers for growing genetically engineered seeds without authorization, as I wrote about here.

In a 2011 Federal Court decision in the case of Monsanto Co. v. Bowman, the court awarded $84,000 in damages against an Indiana farmer named Bowman.

Bowman bought seeds containing Monsanto’s Roundup Ready® technology from a Monsanto-licensed seed producer.  The contract prohibited Bowman from saving any of the resulting crop of soybeans for replanting in future years.

To plant a second, late-season crop, Bowman bought cheaper “commodity” seeds. These are seeds from different sources, including from farms that grow Roundup Ready® soybeans.

Monsanto didn’t prohibit soybeans grown from its seeds from being sold as commodity seeds, and over 90 percent of Indiana’s soybeans are herbicide-resistant varieties.  Bowman saved seeds from this second crop to replant.

Monsanto found that 300 acres of Bowman’s second-crop soybean seeds contained its patented technology and sued him for patent infringement.

Bowman raised the defense of patent exhaustion. Under the exhaustion doctrine, the first sale of a patented item exhausts the patentee’s rights in that item, including the right to control how it may be used.

However, the Federal Circuit held that the doctrine didn’t apply where an infringer used a patented self-replicating technology — such as a seed.

The case made it all the way to the Supreme Court, which held:

Under the doctrine of patent exhaustion, the authorized sale of a patented article gives the purchaser, or any subsequent owner, a right to use or resell that article. Such a sale, however, does not allow the purchaser to make new copies of the patented invention. The question in this case is whether a farmer who buys patented seeds may reproduce them through planting and harvesting without the patent holder’s permission. We hold that he may not.