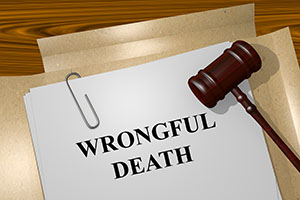 On January 31, 2015, Bobbi Kristina Brown, or “Krissi,” was found unresponsive in the bathtub of the home that she shared with Gordon.  Bobbi Kristina was rushed to a hospital, but never regained consciousness. She was moved to hospice care and eventually died on July 26, 2015. She was 22 years old.

On the day that Brown was moved to hospice, the conservator of Brown’s estate filed a $10 million civil suit against Gordon, alleging that Gordon had abused Brown, controlled her, and taken a significant amount of money from her without her permission.

In May 2015, Bobbi Kristina’s father, Bobby Brown, joined the suit as a plaintiff. The lawsuit was amended in August 2015 to include an allegation of wrongful death and to seek $50 million in damages. The suit alleges that Gordon “gave Bobbi Kristina a toxic cocktail rendering her unconscious and then put her face down in a tub of cold water causing her to suffer brain damage.”

An autopsy of Bobby Kristina’s body found morphine, cocaine, alcohol and prescription drugs in her system. Because the medical examiner’s office couldn’t determine if it was a suicide, homicide, or accidental death, her cause of death was classified as “undetermined.”

The Ruling Against Gordon

Fulton County Superior Court Judge T. Jackson Bedford signed an order stating that Gordon had repeatedly failed to meet court deadlines, so Bobbi Kristina’s estate won the case by default. In his ruling, Judge Bedford noted that Gordon had “failed and refused to comply with the order of this court” and found Gordon to be in contempt. Judge Bedford’s order prohibits Gordon “from introducing any facts contrary to the facts as set forth in the amended complaint” by Brown’s estate. The amount of damages will be determined by a later jury trial.

No lawyer is listed for Gordon in the online court records. The most recent attorney listed for Gordon is W. Bryan Green, who removed himself from the case in November. Joe Habachy and Jose Baez represent Gordon for any criminal charges, but stated that they were not involved with this civil case. Fulton County District Attorney Paul Howard was investigating this case, but no criminal charges have been filed against Gordon at this time.

Bobby Brown stated that he was “pleased with the outcome of today’s court proceedings.”  He said, “All I ever wanted was answers relating to who and what caused my daughter’s death. Today’s judgment tells me it was Nick Gordon … Now I need to process all the emotions I have and lean on God to get me and my family through this.”