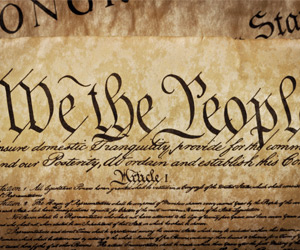 Mississippi has formally adoptied the 13th Amendment to the Constitution, officially accepting the US Constitution’s abolition of slavery.  Although Mississippi voted to ratify the 1865 amendment in 1995, officials committed an error by not submitting necessary paperwork, and the process remained incomplete.  The error was caught by a Mississippi citizen after he watched the Oscar nominated film, Lincoln, leading to a request for State officials to remedy the problem and formally adopt the US ban on slavery nearly 148 years after it has been in effect.

Amending the US Constitution

By design, amending the US Constitution is not an easy process, particularly when the change is not universally supported.  For any who have watched the movie, Lincoln, the hardship and drama associated with changing the nation’s guiding legal document should be somewhat apparent, however, a short lesson clarifying the details seems warranted.  The movie accurately portrayed, and emphasized with several scenes of Sally Field fretting over Congressional sessions, the President’s lack of control over whether or not an amendment is passed – the power to do so instead falls to Congress.  Presidents can, and certainly will, maneuver behind the scenes like Lincoln did when pushing for the 13th Amendment, however, it is Congress’s vote which determines the success or failure of the law.

An amendment to the Constitution is only successful if both houses of Congress, the House of Representatives and the Senate, approve the measure by a two-thirds vote, ensuring that it is almost impossible for one party to control whether an amendment is passed.  Although an amendment may also be passed by a convention called for by two-thirds of state legislatures, none of the 27 amendments to the Constitution have been passed in such a manner – all have been voted upon by Congress.

Once the amendment passes through Congress by two-thirds vote, it is sent to State governors for ratification.  If three-fourths of the States (38 out of 50) ratify the amendment as voted on by Congress (no edits can be made) then the amendment is added to the Constitution and becomes controlling law, even to the States that did not ratify it.  This process is not merely a formality: 6 amendments have been passed by Congress but not ratified by the States, meaning none of them became law.  Once three-quarters of States vote to approve an ammendment and complete the necessary ratification procedures, the amendment is certified and added to the Constitution, often with great ceremony of which the President is a symbolic part.

After Lincoln: A Brief History of the 13th Amendment’s Ratification

To pick up where Lincoln ended is clearly missing out the most interesting part of the 13th Amendment’s history, but doing so will help illuminate how Mississippi failed to recognize the law until a few days ago. After President Lincoln, with help from Tommy Lee Jones, pushed the 13th through Congress in January of 1865, it still faced ratification by the States.  With the American Civil War ending in April of 1865, the 36 States in the reunited country began voting on ratification.  As you may have guessed, this process was ultimately successful, ending when Georgia became the 27th State to ratify in December of 1865.

The remaining States which refused to approve the law, Mississippi among them, continued to trickle in ratification throughout the 1800’s and into the 1900’s.  Although ratification amongst these states was a formality, legislatures across the country continued to approve the measure up until the mid-90’s, when Mississippi became the last State by finally deciding to ratify by unanimous vote in the State legislature.  What Mississippi forgot to do when it ratified in 1995 was notify the US Archivist, meaning that the process was not formally completed.

Mississippi resident, Ken Sullivan, upon receiving a tip from a fellow citizen, dug into the history of Mississippi’s ratification and, after being moved by Lincoln to take action, formally requested Mississippi’s Secretary of State to correct the error.  On February 7th, 2013, Mississippi’s ratification was completed, and the State joined the rest of the country in officially recognizing the 13th Amendment to the Constitution.  Of course, slavery has been illegal in Mississippi, and the rest of the country, since 1865, however, Mississippi finally crossed its t’s and dotted its (many) i’s to officially close the door on the creation and ratification of one of the most significant laws in the history of our nation.