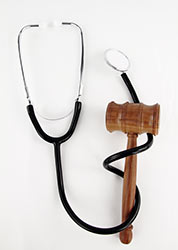 In the Fall of 2012, a meningitis outbreak from tainted steroid shots caused close to 700 people to become ill and the deaths of 45 patients. In the aftermath of the outbreak, ubiquitous lawsuits were filed against the New England Compounding Center where the drugs were created, many of them successful. This led the pharmacy down a path to bankruptcy, leaving victims and their loved ones to seek restitution from the doctors responsible for prescribing the steroid injections, reports an article in American Medical News.

In personal injury cases such as these, victims often seek money damages for not only pain and suffering – both physical and emotional – but for hospital expenses related to injuries, for lost wages due to inability to work, and for many other unforeseen costs. In the case of a defective product that causes injury, bringing suit against the manufacturer is typically the most effective approach, but if the company has no money to pay, what is the point of suing? Such is the case of the company that produced the faulty steroid treatment. Patients are now turning to the next responsible source: physicians who failed to properly inform patients about the risks of the product or who may have been negligent in prescribing the drug.

While the New England Compounding Center has publicly expressed sympathies to victims of the tragedy, recalling the product from hospitals and doctors offices around the country immediately after cases became known, the company simply does not have the means to reimburse patients for their loss. Reports indicate the Massachusetts compounding company intends to raise more funds, but after a Chapter 11 bankruptcy filing, it will take significant efforts to pay the thousands affected by the outbreak.

It is not uncommon for doctors to be sued for medical negligence, not only for error in their treatment process, but also for administering faulty pharmaceutical products. Physicians are bound by legal obligations to inform patients of risks involved with treatments and obtain consent. If these actions are not taken prior to treatment, a health care professional can be liable for damages sought by an injured patient.

In order for a doctor to be found liable for medical negligence, a plaintiff would have to show that:

If all of these elements can be proven, the defendant will likely be made to pay damages to the injured patient (with the exception of a few states – including Massachusetts, where new laws have determined that an apology from a doctor and out-of-court payments are a sufficient alternative to a medical malpractice lawsuit). Read more about new malpractice laws in A New Approach to Medical Malpractice Claims in Massachusetts.

Medical facilities do tend to have extensive legal counsel on hand for just these cases, however, many malpractice cases never see the inside of a court room, even in areas where malpractice lawsuits are common. Doctors have to be able to make an occasional mistake (the hope is they that do not injure patients in the process) without facing total destruction by litigation. They have to have protection from frivolous lawsuits as well; if winning a malpractice lawsuit were easy, who knows how many millions would be lost to irresponsible claims. On the other hand, there have to be serious consequences for those physicians who work with low standards, as their actions can significantly affect the wellbeing of others. This is why each case is subject to a strict set of elements to be proven.

In addition to these standard elements, in this case of meningitis outbreak, doctors who distributed the tainted steroid may have to answer to a whole different question: Are they liable for the risk of purchasing drugs from what are known as “compounding pharmacies?”

Compounding pharmacies are companies that take already-manufactured drugs and reconfigure new drugs to meet specific needs of patients. The risk here is obvious: that the extra step may leave more room for error. A product that has gone from the testing labs, to the manufacturer, and straight to your neighborhood pharmacy or doctor’s office, has gone through established avenues. But add in the middle man and regulations may fall short. Although the federal government regulates pharmaceutical manufacturers, state agencies oversee pharmacies, including compounding pharmacies. With an increase in use of these pharmacies in recent years, some would argue that regulation has fallen short. Such is the case with New England Compounding Center, as reports indicate it was not fully accredited with all of the necessary state agenies.

So, should doctors who choose to purchase drugs from these pharmacies be held liable to some extent for this choice? Should they be held liable for not properly explaining the risks of using this type of compounded treatment as opposed to non-compounded to each patient who was given the steroid? These are questions for the courtroom as the number of lawsuits filed against physicians increases.