Man Who Found $150,000 in Cash in His Vegetable Garden Faces Legal Battle 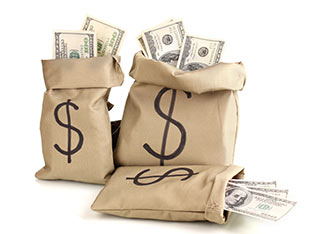 An unclaimed bundle of cash has created controversy in a small suburban Chicago neighborhood.  Two local residents and the owner of one small business have filed a legal claim in court over $150,000 in found cash.

An unemployed local man found the large stash in his vegetable garden, and turned it in to the proper authorities.  Now, the law of found property will determine whether or not he gets the money back.  After returning the cash, two other parties have come forward claiming the money belongs to them: a neighbor who has not released the details of her claim to it, and a local business owner who claims the cash was stolen from his car in 2010.

The man who found the money said that he called the police because he has bad luck, and that he figured he’d be arrested for using money stolen in a bank robbery. Of course, this was the right decision as the finder of property does not automatically have the legal claim to it.

These laws only apply if the property is determined to be lost by the owner as opposed to abandoned.  If property is lost, it is defined as being in a place where the true owner does not know where it is or did not intend to leave it there.  In that case, the true owner has the ultimate claim to the property over all other parties.  When property is abandoned, it is typically decided that the true owner put it in its place with no intention of reclaiming it.  In the case of abandoned property, the person who finds generally gets to keep it unless it is claimed by the state.

In this case, the $150,000 is considered lost, and the court system must found which of the three claims to it is strongest.  If the small business owner in this case can show the money was stolen from his store, then he will likely have the strongest claim.  If not, he will have no claim, and the man who found the stack of cash will probably get to keep it.

The case presents an interesting glimpse into found property law, and serves as a reminder that no matter how much money is found, or how unlikely it is that the original owner would lay claim to it, it is not worth keeping.  If a person keeps money they find, and are not the holder of the superior claim, they could face criminal consequences.  While it is frustrating to turn over a large sum of cash to the authorities without knowing if you will get it back, the law is not going to automatically follow the old adage, “finders keepers.”