Male Activists Fight for Their Rights 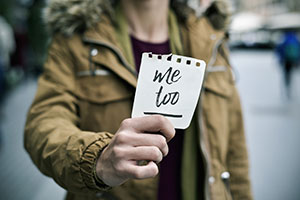 Some men feel that, especially  in the #MeToo era, their own rights are bring abused.

As the New York Times reports, Rich Allison, a former Marine Corps  captain, has been the  plaintiff in 13 lawsuits — most involving alleged discrimination against men.

He has sued under California’s Unruh Civil Rights Act, which prohibits discrimination by businesses on the basis of sex, race and other personal characteristics.

The nonprofit was seeking to address the  fact that over 90% of the people working in cybersecurity were male.

Allison is involved with the National Coalition for Men (NCFM), an advocacy organization that seems to advance men’s rights.

The NCFM has 29 chapters in the US and abroad.

One of the men involved in the movement is Allan Candelore. I wrote about him in this blog about a case involving allegations of age discrimination in pricing by the Tinder dating app.

The Coalition members object when bars and clubs offer “Ladies Night” free admission or drink discounts only to women. Sometimes they’ve sued in response to such offers.

For example, Allison was a plaintiff in a civil rights case against the heavy metal band “Five Finger Death Punch” and against House of Blues and Live Nation when the band held  a “Chicks for Free” concert but charged men $27 each.

Allison and others also sued a country club for hosting a networking cocktail party for women, and sued a restaurant and bar for charging men (but not women) a cover charge.

All of the cases settled.

One case, a class action involving a Ladies Night discount  at Tony Roma’s,  led to a $370,000 settlement.

Another case, involving free hats given to women attending an Oakland A’s baseball game on Mother’s Day, settled for $500,000.

Allison also sued a shooting range for providing free use for women once a month.

Another recent case was brought against a strip club for hosting a “Lesbian Night.”

However, the plaintiffs don’t always win.  In 2011, the Trump National Golf Club in Rancho Palos Verdes, California was sued for offering women golfers a 25%  discount and a donation of part of their green fees to research organizations during Breast Cancer Awareness Month.

(At the same time, as the LA Times notes, the Trump club was sued because, allegedly, when Donald Trump “saw less-attractive women working at his club… he wanted them fired.”)

A judge dismissed the Breast Cancer donation case, ruling that the promotion didn’t “perpetuate any kind of stereotype, but rather supported public awareness of breast cancer.”

The decision was upheld on appeal.

According to the Times, the men’s rights plaintiffs  feel their lawsuits benefit women as well as men because special offers by bars and clubs are often intended to attract women customer as “bait” for men.

Will Gig Economy Workers Get a Share of the Company?
Proposed Rules Would Reduce College Sexual Misconduct Investigations
Congress Considers Ordering VA to Study Marijuana for Veterans
Jail Phone Calls to Lawyers Can Be Used as Evidence
Will Virtual Currencies Get a “Safe Harbor”?
Can You Go to Jail for a Bad Debt?
Question Mark Lets James Woods Beat Defamation Suit
Pay Less for Drugs by Asking One Simple Question
Investment Firm Accused of Being Hostile to Women
What Happens If You Break an NDA?