The law has been in effect since October 2013. The lone conviction to occur in that time suggests that the law has not opened the floodgates to criminal prosecutions of people who post unwelcome images on the internet. That is as it should be. Those who want to broaden the law fail to appreciate the risk to the First Amendment right to free expression that is posed by any attempt to punish people for publishing on the internet.

Iniguez engaged in the kind of conduct that has historically been prosecuted as assault or as harassment. It is conduct that targets a specific person with the intent to harm that person economically and emotionally.

Fears About Laws That Criminalize Distribution of Images 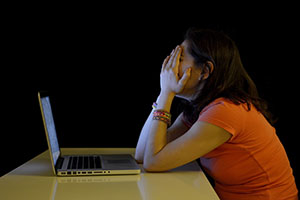 Any time the government punishes someone for publishing content on the internet, grave concerns arise about the potential infringement of freedom of expression. In 1997, a unanimous Supreme Court emphasized the importance of the internet as a forum for free speech when it struck down anti-indecency provisions in the Communications Indecency Act. The Court recognized that the internet gives ordinary people “a voice that resonates farther than it could from any soapbox.”

Congress claimed that it was protecting minors from indecent speech by enacting the Communications Decency Act, but the Supreme Court concluded that the Act also suppressed a large amount of communication that adults have the right to receive and distribute. By attempting to keep children from seeing pictures of breasts, for example, the law potentially criminalized the digital distribution of photographs depicting breast cancer treatments and serious works of art.

Notably, the ACLU withheld comment on the Iniguez conviction. The civil rights organization presumably concluded that the law is narrowly drawn to minimize constitutional concerns. Several factors appropriately limit the circumstances under which the law applies.

First, the law applies only to images that are photographed or recorded. A drawing or description does not violate the law. Neither does telling a graphic story about a former intimate partner.

Third, the person must be identifiable. In most cases, that means the person’s face must be visible in the picture. While there may be other circumstances in which a person is “identifiable” (by a unique tattoo, for instance), only in rare instances will distribution of an image violate the law if it does not reveal the person’s face.

Fourth, the parties must agree or understand that the image is to remain private. That agreement will be clear if it is made expressly (“you have to promise that nobody will ever see this picture”), but an implied agreement appears to be sufficient if the circumstances establish beyond a reasonable doubt that both parties understood when the picture or video was taken that it would not be seen by other people. However, proving what the accused “understood” may be difficult for the prosecution in the absence of an express agreement to keep the image private. That places an appropriate burden on the person being photographed to make his or her wishes known at the time the image is recorded.

Finally, the person depicted in the image must actually experience severe emotional distress. If that person routinely posts revealing pictures to social media websites or has been paid for nude modeling, it may be difficult to prove that the publication of one more photograph was truly a distressing event in her life.

Critics Who Want to Broaden the Law Are Misguided

The limited scope of the law assures that appropriate protections are provided against the criminalization of free speech. Because the law only applies when actual psychological harm is caused to an identifiable person, it cannot be violated by the mere distribution of artistic or political images that some might find offensive.

Critics of the law want to see it broadened. Mary Anne Franks, an Associate Professor of Law at the University of Miami, argues that requiring proof that the depicted person suffered serious emotional distress “is unnecessary, burdensome and potentially requires the victim to expose even more of her private life to the public eye.” In fact, requiring the government to prove that a crime victim was actually victimized is always burdensome. The victim of an assault might find it burdensome to come to court to testify about the harm that the assault caused, but requiring proof beyond a reasonable doubt in a trial that allows the accused to confront the accuser is fundamental to the American system of criminal justice. That right has always trumped the desire of an alleged crime victim to avoid participating in the criminal justice process.

Franks’ description of cases like the Iniguez prosecution as “nonconsensual pornography” is a serious overstatement. Courts no longer view topless photographs as pornography. And while the distribution was nonconsensual, the woman depicted in the photograph did consent to having her photograph taken. Some people will experience distress when a photograph of that nature is distributed without their consent but others will not.

This law is different from those that punish the use of a hidden camera to record nudity without the knowledge of the person who is being photographed. That kind of intrusive conduct is criminalized by a different section of the law that also applies to “peeping Tom” offenses. When someone willingly poses nude and knows that his or her image is being recorded, it is appropriate to punish the distribution of those images only if they cause actual harm.

A narrowly drawn law like California’s is consistent with the historical understanding that freedom of speech does not include freedom to harass or to invade personal privacy. At the same time, we must always be vigilant to assure that such laws are not expanded to interfere with the fundamental freedoms that our Constitution protects.

U.S. House Approves Renewal of Violence Against Women Act
Church of Scientology Sued for Fraudulent Use of Donations
Colorado Law Requires Professionals to Report Elder Abuse or Face Criminal Charges
Has Your Lawyer Been Hacked?