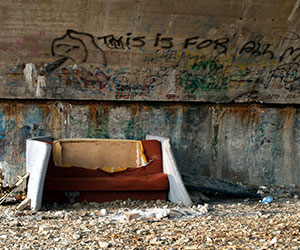 A legal fight over homeless property may be headed to the Supreme Court. The city of Los Angeles is expected to request that the Justices review a recent decision that upheld an injunction preventing the city from removing and destroying personal property left unattended by homeless citizens. The decision against LA was made last September by the San Francisco based 9th Circuit Court of Appeals, and the city has recently announced its plans to take the matter to the nation’s highest court.

The challenged law allowed city officials to remove property that had been abandoned by homeless citizens, and problems arose when it became apparent the city broadly defined the term “abandoned” in its execution of the policy. According to the lawsuit that demanded an injunction against the city, officials were seizing property while its owners were away only a short time to go to the bathroom or fill up water jugs. The Court of Appeals upheld the injunction against the city’s hasty property removal, and instructed the city that it could only remove property that was clearly abandoned, and not just temporarily left unattended. Property that is clearly a threat to health or safety can also be removed.

Restricting the city’s campaign to clean up the streets is supported by the US Constitution, which forbids a government from unlawful seizure of property without just cause. All citizens – including homeless – have private property rights that protect them from aggressive seizures by government officials. The 9th Circuit Court of Appeals agreed with homeless advocates and attorneys who argued that removing property that was temporarily left unattended was a violation of the US Constitution, and therefore illegal.

Los Angeles, and other cities considering similar action, passed its law due to concerns about diseases and other health problems caused by large collections of property and trash that gather on the street. A wave of tuberculoses has struck the LA homeless community, and city officials argue that the law is beneficial to all citizens, including homeless, because cleaner streets are less conducive to the spread of disease.

Homeless advocates responsible for the lawsuits leading to the injunction agree with the city when it comes to cleaning harmful waste, but argue that the broad stroke of property removal is an illegal solution. Proposing instead that the city separate harmful waste from individual property, lawyers for the homeless believe that a compromise can satisfy the goal of improving health without violating Constitutional rights. While a law that requires separating waste from personal possessions sounds good in theory, Los Angeles officials have pointed out that the city does not have sufficient resources to carry out such a policy. Further, a policy forcing city clean up employees to sift through piles of possessions to determine what is waste and what is not puts workers at an undue risk of harm.

The relationship between seemingly beneficial public policy and Constitutional rights is not always a harmonious one, and this case illustrates a gap between practical and effective policy and Constitutional demands. It is without contention that cleaning the streets of LA from seemingly abandoned property that may contain waste hazardous to the health of citizens is beneficial, and it is believable that the city does not have the manpower to carry out this policy if it is required to evaluate what property can be removed. However, as the Federal Court of Appeals correctly noted, an aggressive seizure of property is a violation of the Constitutional rights guaranteed all Americans – including the homeless.

In this case, the Court of Appeals provided Constitutional guidelines for the city by declaring that Los Angeles could remove private property that was an obvious threat to safety, or that had been clearly abandoned. Los Angeles officials have countered that such a limitation is too onerous to allow the law to have any practical application, and it will be up to the Supremes to determine if the health concerns articulated by the city warrant compromising the Constitutional right to private property. With the Court of Appeals offering the city a pathway to satisfy the purpose of the law without violating the Constitution, it could be difficult for attorneys representing Los Angeles to convince the Justices that a strain on city resources justifies limiting Constitutional rights.

The case is still a long way from the Supreme Court – once LA officials formally submit the case to the Justices, it must be accepted for review – but the matter is one of growing importance. With increasing numbers of homeless citizens, cities across America could be affected by the outcome of this case. If the issue does go to the Court, a ruling will set a precedent that American cities will need to keep in mind when they address concerns about property belonging to homeless individuals collecting on streets and sidewalks.