Is It Unlawful to Discriminate Against Customers Who Wear Political Attire? 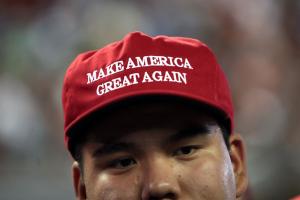 Can a business that serves the public discriminate against a patron because the patron wears clothing that expresses a political belief? The answer may depend upon the city in which the belief is expressed.

In January 2017, shortly after President Trump took office, an accountant from Philadelphia walked into Manhattan’s The Happiest Hour wearing a red MAGA hat. As Greg Piatek tells it, he was ejected from the drinking establishment solely because of the “Make America Great Again” message expressed on his headgear.

Piatek contends that bartenders told him that they would not serve anyone who supported Donald Trump. The bar disputes that allegation. According to The Happiest Hour, Piatek and his friends were served — they spent $200 and left a tip — and were only kicked out when they started abusing staff.

In any event, Piatek sued the business, claiming that the refusal of service “offended his sense of being American.” The expression of political opinions is a cherished American right protected by the First Amendment, but the First Amendment regulates the conduct of the government, not private businesses. Does refusing service based on a political belief violate the law?

Discrimination is illegal in employment, housing, and places of public accommodation, including businesses that serve the public, but only if the discrimination is based on a characteristic that is protected by law. Most of those characteristics — like race, sex, and disability — are relatively immutable, but laws also protect certain characteristics, such as membership in a religion, that might change over the course of time.

No federal law prohibits a business or a landlord from discriminating against individuals because of their political beliefs. Certain members of the Trump administration have been refused service at restaurants, presumably because they are seen as representing views with which restaurant employees did not want to be associated.

Refusing service because of an occupation might be rude, but in most places, it is not unlawful. For example, a California developer who refused to sell a home to a lawyer did not violate housing discrimination laws because California law does not identify “occupation” as a protected class for purposes of discrimination against business customers.

Some state and local governments have broadened their definitions of protected classes, although primarily in housing discrimination laws, to include “occupation” or “source of income.” Those modifications came about, in part, because lawyers were finding it difficult to rent from landlords who feared that renting to a lawyer would lead to a lawsuit if the landlord violated housing codes or failed to return a security deposit.

Laws that prohibit discrimination in places of public accommodation, including restaurants, rarely include political occupations or beliefs as a protected class. California prohibits business establishments from discriminating on the basis of “sex, race, color, religion, ancestry, national origin, disability, medical condition, genetic information, marital status, sexual orientation, citizenship, primary language, or immigration status” but does not include political beliefs in its list of protected classes.

There are exceptions, but they are few. For example, the City of Madison, Wisconsin has one of the broadest civil rights ordinances in the nation. It prohibits discrimination on the basis of (among other classes) “political beliefs” and “physical appearance.” Political beliefs are defined as including “one’s opinion, manifested in speech or association, concerning the social, economic and governmental structure of society and its institutions.” The definition of physical appearance includes “manner of dress.”

Refusing service to a restaurant patron because of a MAGA cap would appear to discriminate on the basis of political beliefs and physical appearance, as Madison’s ordinance defines those terms. In most other parts of the country, however, people who are denied service because of political headgear will need to find another place to eat or drink.

Since neither attire nor political expression is protected by New York law, Piatek made the creative argument that his MAGA hat was a religious symbol and that he was discriminated against because of his religion. Piatek argued that he and his friends went to the bar after visiting the 9/11 memorial and that his hat reflected a “spiritual tribute” to 9/11 victims.

Discrimination, however, is an intentional act. To discriminate on the ground of religion or creed, the business would need to know that its customer wore a MAGA hat for spiritual reasons. A MAGA hat, after all, is not a symbol like a burka or a Christian cross that is readily identified with a particular religion. Nor is it obvious how a hat that did not come into existence until the 2016 presidential campaign would relate in a spiritual way to a tragedy that occurred fifteen years earlier.

Even if the bartender had reason to know that Piatek had visited the 9/11 memorial, it would require a leap beyond logic to assume that visiting a sectarian memorial is an expression of a spiritual belief. And even if the bartender knew that Piatek visited the memorial for religious reasons, there is no reason to believe that the alleged refusal of service was based on hostility to religious beliefs as opposed to hostility to political support of Donald Trump.

In dismissing the lawsuit, the judge refused to stretch logic beyond its breaking point. A MAGA hat, the judge ruled, does not reflect any faith-based principle. Americans have the right to support any politician they choose, but as Piatek’s lawyer aptly noted, “[s]upporting Trump is not a religion.” Since Piatek had no evidence that he was subjected to discrimination because of membership in a protected class, his lawsuit was dismissed earlier this year.