City officials in Houston, Texas came under fire this week for issuing a wide-ranging subpoena to gather content from religious sermons issued by pastors who are opposed to the city’s new approach to equal rights for gay citizens.  The subpoenas, issued as part of a lawsuit filed by church leaders, broadly requested the sermons in order to assist the City in its legal defense of the equal rights ordinance, but critics argue that Houston attorneys went too far with the intrusive request into religious communications. 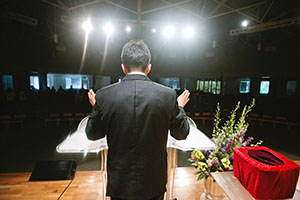 The dispute began last spring when Houston’s City Council and Mayor Annise Parker passed the Houston Equal Rights Ordinance (HERO) that prohibited discrimination against gay, lesbian, and transgender individuals in employment, housing, and contracting decisions.  In response to HERO, Christian pastors spearheaded a campaign to repeal the measure by gathering signatures on petitions to get a referendum vote and allow the city’s residents to decide whether or not the ordinance should go into effect.

As part of the lawsuit’s discovery phase, Feldman and Mayor Parker approved subpoenas to five area pastors that demanded full text of all sermons regarding the issue be turned over to city officials.  The pastors responded by alleging the subpoenas were unconstitutional, and refused to comply until the trial court ruled on the issue.

According to Houston’s subpoena request, pastors were to turn over “all speeches, presentations, or sermons related to HERO, the Petition, Mayor Annise Parker, homosexuality, or gender identity prepared by, delivered by, revised by, or approved by you or in your possession.”  Under these subpoena requests, the pastors in question would need to provide the City with full text of every sermon that had mentioned homosexuality, even if the mention was not relevant to the passage of, or opposition to, HERO.

In response, the pastors and conservative advocates across the country condemned the requests as unconstitutional intrusions into the practice of religion, and argued that the City had no right to command the text of all sermons that discussed HERO or homosexuality in general.

A letter sent by the Texas Attorney General strongly attacked Houston officials for “a direct assault on the religious liberty guaranteed by the First Amendment,” and called for Mayor Parker to reverse her stance on the issue and revise the subpoena request.  The First Amendment offers strong protection for the confidentiality of religious communications, and prevents government officials at any level from creating an undue burden on the right to practice religion.  Conservative church leaders cited First Amendment protections, and argued that Houston officials had no right to intrude on religious communications, even if the sermons crossed back and forth from religious and political dialog.

The religious protection argument advanced by the Texas AG and other conservative Christian groups earned national attention, however, it lacks sufficient legal authority.  The Supreme Court has routinely allowed subpoenas for conversations the First Amendment would otherwise protect such as meetings between newsmen and confidential sources, or discussions of peer review in academic tenure decisions.  Given the fact that HERO itself is seen as an assault on religious values, it is unsurprising the pastors and their legal advocates turned to the First Amendment to further the argument that Houston officials have acted hostile to Christian interests, but in truth the legal reason to quash the subpoenas is a secular one.

The real issue with the subpoenas is that the government asks for information that is irrelevant to the litigation.  Although Houston AG Feldman claimed that the material in the sermons was largely political, and therefore relevant to the pastor’s motivations for the lawsuit, the truth is that much of the requested material does not pertain to whether or not the City improperly discounted signatures on the petitions calling for a HERO referendum.  Subpoenas may not be overbroad in what they request, and given the wide net cast by Mayor Parker’s office, the subpoenas issued in the HERO lawsuit seemed excessive.

In response to the national rebuke, Mayor Parker and Houston city attorneys backed off the broad request in its initial subpoenas to the pastors filing the HERO lawsuit.  The subpoenas now request, “All speeches or presentations related to HERO or the Petition,” which, according to Parker, would still include sermons if the pastor dedicated a portion of his time on the pulpit to discuss the HERO petition process or the lawsuit.