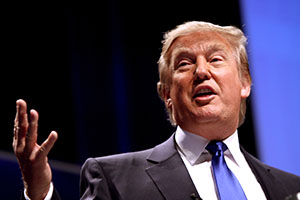 Trump Sued Zakarian for Backing Out of Restaurant Deal

Following these statements, Zakarian dropped his plans to open his restaurant and announced that, “statements surrounding Mexican immigrants by Donald Trump do not in any way align with my personal core values.” He further noted that, “My whole life is spent with Mexican-Americans. Seventy-five percent of my staff is Mexican-American. They’re my backbone. That’s a family.”

Zakarian claimed that Trump’s statements would make it impossible to attract the staff and clientele that would be necessary to the restaurant’s success. Restaurateur Jose Andres also decided to withdraw from the project.

Trump sued both Zakarian and Andres and kept their deposits of $250,000 and $500,000. Both chefs countersued. In his suit against Zakarian, Trump claims the two companies affiliated with Zakarian breached their contract. Zakarian responded that it was Trump who breached the agreement because his inflammatory campaign comments amounted to the breach of the covenant of good faith and fair dealing.

Trump Attempted to Get Out of Being Deposed

When Zakarian served Trump with a notice of deposition, Trump filed a motion to quash it. He claimed that he did not have any “unique, first-hand knowledge of the facts and issues in dispute” that couldn’t be learned from his son or daughter, who handled most of the dealings related to the hotel. Trump’s attorneys claim that the only purpose of the deposition was to harass him and that it would be an inconvenient burden on his schedule.

Zakarian argued that Trump was needed because he claimed personal involvement in the development of the hotel, he personally signed the order seizing the deposit money, and he was the only person who knew why he made those statements.

D.C. Court Judge Brian F. Holeman ruled for Zakarian and ordered the deposition to take place. The two-hour deposition took place at the offices of the law firm representing Zakarian. Approximately 60 protestors were seen outside the firm.

Other Lawsuits Pending for Trump

Amazon Refuses to Release Echo Recording Without Search Warrant
Is Airbnb Responsible for Property Rental Discrimination?
Will You Be Judged by a Jury of Your Peers?
When Are Lawsuits Frivolous?