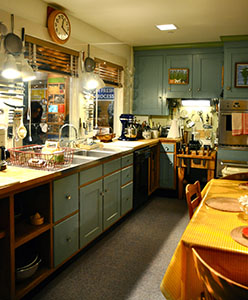 The Julia Child Foundation for Gastronomy and the Culinary Arts sued Airbnb after the company ran a contest in which a prize was a free night at a vacation home once lived in by the famous chef.

As reported by the Los Angeles Times, Airbnb contacted the Foundation in April seeking permission to use her name and picture for the contest.

Child had a policy of refusing to endorse cooking products or letting her name be used in advertising. The Foundation thus denied the request.

Despite this refusal, Airbnb’s marketing firm later sent out an email describing the home in Provence, France, and saying that guests could look through “the knickknacks in her kitchen exactly as she left them.”

Child, who died in California in 2004, last visited the house in 1992. According to the complaint, Child and her husband rented the property but didn’t own it. The Foundation said she removed her cooking equipment on her last visit.

Child’s home kitchen, with her cooking equipment, has been reconstructed at the Smithsonian National Museum of American History.

The Foundation’s complaint seeks damages and injunctive relief for misappropriation of the right of publicity under California Civil Code section 3344.1.

Under California law, a lawsuit claiming unauthorized use of a person’s name, voice, signature, photograph, or likeness can be brought up to 70 years after the person’s death.

The law applies to anyone who qualifies as a “deceased personality,” which means any person whose

name, voice, signature, photograph, or likeness has commercial value at the time of his or her death, or because of his or her death, whether or not during the lifetime of that natural person the person used his or her name, voice, signature, photograph, or likeness on or in products, merchandise, or goods, or for purposes of advertising or selling, or solicitation of purchase of, products, merchandise, goods, or services.

In California, the publicity right is a form of property rights and can be bequeathed to one’s heirs.

Previously, the California Supreme Court had held in the 1979 Lugosi v. Universal Pictures decision (involving iconic images of actor Béla Lugosi as Dracula) that the right of publicity, including the rights to a person’s image, ended with the person’s death and could not be bequeathed to heirs.

Most people are aware that they can’t just use the name or picture of a live celebrity to promote products or services without permission. However, using the image of a dead celebrity can also lead to a lawsuit.

Publicity rights are governed by state law. Indiana’s is especially far-reaching, and protects rights for 100 years after a person’s death.

Thus, before using the name or image of even a long-dead celebrity in advertising, it’s a good idea to check whether publicity rights survive death in your state. If they do, then you can try to contact the heirs to obtain permission.