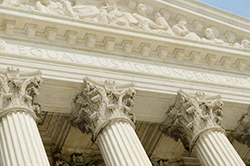 The United States Supreme Court will determine whether or not the federal government can force groups that fight HIV/AIDS infections overseas to condemn illegal prostitution as a condition for receiving funding.   The case arises under a 2003 federal law that requires groups that receive government money to combat the spread of AIDS in foreign countries to have “a policy explicitly opposing prostitution.”  Groups who conduct anti-AIDS efforts abroad claim that the law is a violation of their First Amendment rights to free speech, and undermines their efforts in foreign nations.

Opposition to the Law

According to Solicitor General Donald B. Verrilli Jr., the purpose of the condition was to ensure that groups receiving federal money complied with “a strategy that seeks not only to treat HIV/AIDS but to reduce the behavioral risks that foster its spread.”  While the purpose is noble, groups fighting the spread of AIDS claim that “adopting a policy that explicitly opposes prostitution would jeopardize [their] effectiveness in working with high-risk groups.”  Taking such a stand, they argue, could alienate some of the groups they work with abroad, and make their work more difficult.  While the anti-AIDS organizations do not endorse prostitution, and recognize its dangers, they argue that in order to establish an effective presence in a foreign country they need to remain neutral on the issue.

Citing the First Amendment, the groups claim that such a broadly worded restriction violates their right to free speech by “compelling them to adopt and espouse as their own a certain viewpoint, and to prohibit ‘inconsistent’ speech and activities, even if undertaken with private funds.”  The right to free speech not only allows citizens and organizations to speak their opinion, but it protects them from being forced into taking a position.  In this case the groups argue that, while it is acceptable to limit use of money granted, it is unacceptable to require an organization to adopt a position that effects all of its programs, even ones that are funded privately.

Lower courts have agreed with the anti-AIDS groups, and have blocked the law in the decisions leading up to the Supreme Court’s acceptance of this case.  In a divided ruling, the three-judge United States Court of Appeals for the Second Circuit found that the law did violate freedom of speech by forcing organizations to take a stand on prostitution.  Although one judge voted to uphold the law as a “common-sensical condition of federal funding,” the two in the majority felt that the condition was over-broad and violated a constitutional right because it forced funding recipients to adopt policy.

The Supreme Court has in the past determined that the government may not attach conditions to the receipt of federal funds if those conditions violate constitutional rights.  Therefore, if they agree with the lower court that a law that requires groups to adopt policy and take a public stance is one that compels speech in violation of the First Amendment, then the law will be considered unconstitutional.  Justice Elena Kagan, who has worked on this case as a US solicitor general, recused herself from the case, meaning only 8 of the 9 Supremes will decide the matter.