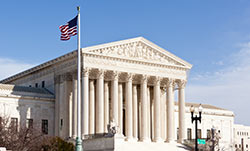 Oral arguments for the historic and much anticipated Supreme Court cases deciding the future of gay marriage played out last week, kick-starting rampant speculation amongst legal commentators about how, or if, the Justices will shape the future of gay marriage law. Although both cases give the Supremes the opportunity to declare laws that either prohibit gay marriage or limit benefits to same sex couples to be unconstitutional, it is likely that the decision in each case will be more narrow – expanding gay marriage rights, but not giving constitutional protection.

The Supreme Court and Proposition 8

On Tuesday, the tone of the Justices struck a blow to gay marriage advocates when the Court heard arguments about the Constitutionality of California’s Proposition 8. Prop 8 amended California’s constitution in 2008, and limits marriage to one man – one woman couples. Opponents of the measure challenged the law by arguing it is a violation of the Equal Protection Clause of the 14th Amendment to the Constitution. The nature of this challenge would allow the Justices the opportunity to declare Proposition 8, and measures similarly strict on the definition of marriage, to be unconstitutional – effectively preventing states from banning same sex marriage.

As the Justices reacted to arguments, it became apparent that they seemed unwilling to take such a broad stroke. Justices on both sides of the ideological aisle expressed concern that the case against Proposition 8 was not yet ready because it was unclear whether or not anyone had suffered harm as a result of the Amendment. Others – beating a classic federalism drum about the right of the US Government to tell states what they can and cannot do – questioned the logic of using the Constitution to strike down California law, thus making a sweeping decision about gay marriage that would impact the entire country.

The Supreme Court and DOMA

Gay marriage advocates found an apparent reversal in fortune, however, when the Justices heard arguments about the Constitutionality of the Defense of Marriage Act (DOMA). The challenge to DOMA stems from the Act preventing same sex couples who, under the law of their home state, are legally married from receiving federal benefits. Groups opposing DOMA have declared the act to be discriminatory by excluding couples based on their sexual orientation, and it appears the four Justices expected to agree with this argument will vote accordingly. Justices Ginsberg, Kagan, Breyer, and Sotomayor all asked questions or made statements that indicate they find DOMA to be discriminatory and therefore unconstitutional.

Justice Kennedy, the typical swing vote on ideologically divisive cases,  expressed similar concerns with DOMA, focusing the brunt of his questions on whether the federal government had the right to define marriage. Turning a federalism argument that could potentially derail a case against Proposition 8 around, Kennedy said of the law, “The question is whether or not the federal government, under our federalism scheme, has the authority to regulate marriage.” (See Federal Court Deals Blow to DOMA in Windsor vs. United States for more information about this case.)

It is common caution to hesitate when projecting the outcome of a Supreme Court hearing based on the questions and statements made by the Justices during oral argument, however, a sensible view of the outcome has taken shape after this week’s work. It appears the Supremes are very hesitant to make a sweeping statement on the constitutional protections afforded same-sex couples. Whether they punt the question of Proposition 8 back to California because of a legal procedure, or limit their decision on the matter to California and other States attempting to supersede existing legislation that allowed gay marriage with constitutional amendments making it illegal, it would be a truly unexpected outcome if the Court would agree that Proposition 8 is unconstitutional.

That said, it would not be inconsistent if the Court concurrently struck down DOMA. The case against DOMA opens the door for a limited ruling – that the Federal Government cannot define marriage in such a way that excludes same sex couples from the receipt of spousal benefits. While a ruling on DOMA will not make gay marriage legal, or constitutionally protected, striking the law down based on discrimination against same sex couples would be a significant step for gay rights advocates.

The decision, expected in late June, will be another in a growing list of significant rulings from the High Court. If the oral arguments are an indication of how the Court leans, expect a significant, but not complete, victory for gay marriage advocates.