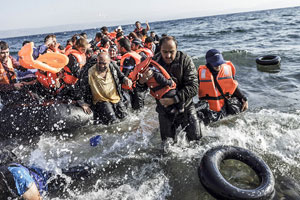 A federal judge has dismissed a lawsuit filed by Texas officials who want to prevent Syrian refugees from settling within the state.

Plaintiff Texas Health and Human Services Commission (the Commission) filed the suit against the United States of America, the State Department, the Secretary of State, and numerous other federal defendants in December after learning that the International Rescue Committee planned to settle six Syrian refugees in Dallas, Texas. The Commission brought claims under the Declaratory Judgment Act, 28 U.S.C. §§ 2201-02, alleging that their actions violated the Refugee Act of 1980.

The lawsuit claimed that the federal government failed to adequately consult with the states before settling the refugees. It sought a temporary restraining order and preliminary injunction to suspend resettlement of Syrian refugees within Texas. President Obama has set a goal of resettling 10,000 Syrian refugees this year.

Texas Republican officials, including Governor Greg Abbott and Senator Ted Cruz, stated that they had security concerns and believed that the refugee program could be exploited by those with terrorist ties.

U.S. District Court Judge David C. Godbey ruled that the state’s claims were without merit. He found that Texas lacked standing to enforce the Refugee Act’s requirement on advance consultation and that it failed to prove sufficient facts to establish a breach of contract.

Jennifer Sime, Senior Vice President of US Programs with the International Rescue Committee, released a statement applauding the court’s decision, “Today’s decision upholds and affirms America’s proud history in providing refuge for the world’s most vulnerable. Refugees are fleeing violence and persecution and want nothing more than to live a safe and peaceful life. The court is unequivocal in validating the lawfulness of the refugee resettlement program and reaffirms Texas’ legacy in welcoming refugees. The integrity and legacy of the refugee resettlement program will continue to be one of this country’s greatest strengths. We will continue to provide the services and support needed to make sure refugees, both in Texas and nationwide, have the support they need to rebuild their lives.”

Texas Attorney General Ken Paxton stated that he was, “disappointed with the court’s determination that Texas cannot hold the federal government accountable to consult with us before resettling refugees here.” Paxton also stated that his office was considering options to, “guarantee the safety of Texans from domestic and foreign threats.”

Texas is not the only state to object to the settling of refugees within its borders. Fourteen states have opted out of the federal resettlement program, which means that voluntary agencies take over coordination of resettlement efforts within those states. Additionally two other states are pursing legal action. Alabama brought a similar suit in January in the United States District Court for the Northern District of Alabama. Tennessee’s attorney general has also announced that he plans to sue the federal government over refugee resettlement. Tennessee’s suit is unique in that it will be the first based on the 10th Amendment. The 10th Amendment states that the federal government possesses only powers delegated to it by the U.S. Constitution, and that all other powers are reserved for the states.

(Photo Credit: “Syrian Refugees” by Freedom House is in the Public Domain)

Can Alternative Sentencing Combat Prison Overcrowding?
Proposition 64 and the Legalization of Marijuana in California
Daily Fantasy Sports Face Cease and Desist Lawsuit in New York State
How an Austrian Student Gave 4,500 US Companies a Privacy Headache