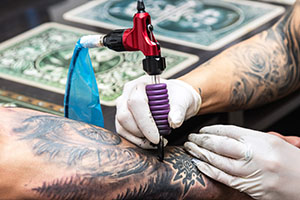 In a previous blog, I wrote about how a tattoo artist sued a local restaurant chain for reproducing one of his designs in its marketing and promotional materials — including on souvenir glasses.

As I explained earlier, several courts have ruled that tattoos are “works of authorship” protected by copyright law.

In 2012, Solid Oak had entered into copyright license agreements with the artists who designed the tattoos used in the NBA 2K game series. In June and July of 2015, the US Copyright Office issued certificates of registration for the designs.

In July of 2015, Solid Oak contacted Take-Two to discuss the alleged infringement. Take-Two terminated the discussions and in September of 2015 released a new version of the game called NBA 2K16, in which the tattoos “were more individualized than in prior versions.”

Solid Oak filed suit in February of 2016. Take-Two moved to dismiss the complaint.

Under Section 412 of the US Copyright Act, in order to get statutory damages and attorneys’ fees, a plaintiff has to have registered its copyrights before suing for infringement.

The court noted that the Copyright Act imposes a “bright-line” rule that precludes recovery of statutory damages “where the first act of infringement in a series of ongoing infringements occurred prior to the work’s copyright registration.”

The court pointed out that the alleged infringement of the tattoo designs began with the release of NBA 2K14 in 2013 and that Solid Oak didn’t register the copyrights until two years later.

Solid Oak had argued that the 2K16 version of the game was a separate act of infringement, but the court disagreed, saying that

when the same defendant infringes on the same protected work in the same manner as it did prior to the work’s registration, the post-registration infringement constitutes the continuation of a series of ongoing infringements. …

The pre- and post-registration versions of the 2K series are the same basketball simulation video game; the only material differences are updates to the title and visual and graphical improvements.

The lesson to be learned from this case is that it’s a good idea to register a copyright as soon as possible. It’s not clear why the plaintiff in this case waited several years after it obtained the rights.

Although qualifying works of authorship are protected by US copyright law as soon as they’re “fixed in a tangible medium of expression” — for example, written down on paper, saved on a computer hard drive, or inked on human skin — a federal lawsuit to enforce the author’s copyright can’t be brought until after the work is actually registered.

Registering a copyright is a simple procedure that can be handled without a lawyer for a filing fee as low as $35. More information is available from the US Copyright Office.

Is Graffiti Protected by Federal Law?
Startup Olaplex Alleges L'Oréal Knocked Off Its Products
Facebook and the Ronda Rousey Copyright Fight
Stealing a Stairway to Heaven?