The Supreme Court has agreed to hear arguments on the constitutionality of Florida’s death-sentencing procedure at the request of an inmate sentenced to the state’s death row.  The convicted defendant has challenged Florida’s capital sentencing process that allows for a death sentence without a unanimous jury vote, and does not require jurors to make specific findings regarding aggravating and mitigating factors that influence the sentencing decision. 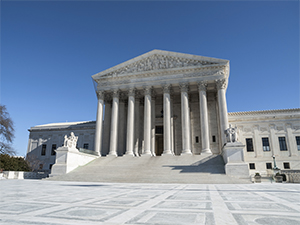 The case before the Supreme Court involves Timothy Hurst, 36, who was convicted of the 1998 murder of Popeye’s restaurant manager Cynthia Harrison.  Hurst, who worked at the Popeye’s, tied and gagged Harrison before stabbing her several times until she died.  During trial and sentencing, jurors were made aware of the fact that Hurst may be intellectually disabled due to fetal alcohol syndrome, but ultimately the question of his mental capacity was dismissed by the trial judge because Hurst was able to get a driver’s license, hold a job, recall phone numbers, and attempt to hide his crime.

In a 7 – 5 decision, the sentencing jury recommended that Hurst receive the death penalty, and Hurst was placed on the state’s death row for execution.  Hurst appealed to the Florida Supreme Court arguing that the court did not adequately consider his claims of intellectual disability and that a death penalty issued by a divided jury is unconstitutional.  The Florida Supreme Court affirmed the sentence, saying that the state’s procedure was fair and constitutional because the jury has opportunity to consider all the relevant factors before recommending a sentence.

Hurst appealed to the Supreme Court, and this week the Justices agreed to decide whether or not Florida’s process is in violation of the constitution in light of its 2002 decision in Ring v Arizona.  The Supreme Court will not specifically address the trial court’s failure to account for Hurst’s potential mental incapacity, but that issue could come up as a flaw in Florida’s scheme.

In its published order that announced what cases the Court would consider, the Justices said of Hurst v Florida: “The petition for a writ of certiorari is granted limited to the following question: Whether Florida’s death sentencing scheme violates the Sixth Amendment or the Eighth Amendment in light of this Court’s decision in Ring v. Arizona, 536 U.S. 584 (2002).”  The Ring decision referenced requires that juries, not judges, make final decisions on the existence of aggravating factors that suggest a defendant should receive a capital sentence.  Under Florida’s death penalty law, juries do not need to make decisions on aggravating factors during the sentencing phase.

According to attorneys for Florida, jurors are provided with the existence of aggravating circumstances, even if they are not required to make a factual determination about the strength of the evidence supporting such circumstances.  Attorneys for Hurst counter that the process, which joins only Alabama in allowing for divided jury votes in death penalty cases, is flawed because Ring requires jurors to make critical decisions on aggravating factors, and arguably mandates that such decisions be unanimous.

The Hurst case will be the second time that the Supreme Court has reviewed Florida’s approach to death penalty cases.  Last year the Court rejected Florida’s rigid method of determining when evidence of mental capacity can be introduced in a death penalty trial.  Florida had a statutory cutoff of 70, and any inmate with an IQ higher could not argue that he was mentally incompetent to be put to death.  The Supreme Court found this procedure too inflexible, particularly in light of modern advancements in science that promote more holistic analyses of mental ability.

Currently Florida is second in the country with 404 inmates on death row, and the state has executed 39 people since SCOTUS’s 2002 Ring decision was announced.  With such high numbers of death row inmates, and increased scrutiny from the Supreme Court on the state’s process, Florida state legislators have reexamined the sentencing phase employed in capital cases.  This week, bipartisan legislation that, among other things, requires unanimous jury decision on issues relevant to death penalty sentencing is scheduled to go before the state Senate.

The Supreme Court will not hear the issue until its 2015 – 2016 term, meaning oral arguments will come in October of this year with a ruling likely in early 2016.