Do Bail Schedules Discriminate Against the Poor? 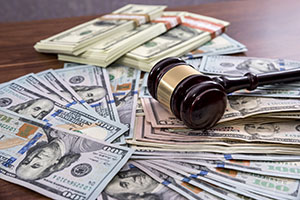 The United States Constitution prohibits the government from setting excessive bail when individuals are charged with a crime. Bail gives meaning to the presumption of innocence by assuring that people do not serve sentences before they are convicted.

In serious cases, particularly when felonies are charged, a judge who sets bail must weigh the interests of the defendant against the interests of society. A defendant who will likely receive a very lengthy sentence upon conviction might have a strong incentive to flee. In those cases, judges tend to set high bail to discourage a defendant from leaving the court’s jurisdiction.

In cases charging less serious crimes, a judge might routinely release the defendant without requiring the defendant to post cash bail. A release on  a recognizance bond (sometimes called a signature bond) is common when a defendant, even if convicted, is unlikely to serve a lengthy sentence.

In other cases, a judge might require the defendant to post a relatively small amount of cash to assure that the defendant appears in court. Cash bail is often set when a defendant has a history of missing court appearances. Defendants forfeit that cash and a warrant is issued if they fail to appear for a scheduled court appearance.

Since some time may pass between an arrest and a bail hearing, many jurisdictions use a “bail schedule” that directs the police to release a person arrested for certain crimes, on the condition that the person posts the amount of cash that is designated for the offense of arrest. For example, if the bail schedule sets $250 as bail for disorderly conduct, a person arrested for that offense will be released after posting $250.

A defendant who posts the bail schedule amount will be given a court date. In some cases, the judge presiding at the first hearing will amend cash bail to a recognizance bond and the cash deposit will be returned to the defendant. The first bail hearing in San Francisco usually takes place within 48 hours, but if a defendant is arrested on a Friday after the courts closed, a three-day weekend or difficulty processing paperwork may cause a delay before the indigent defendant sees a judge.

Bail schedules benefit people who can afford to post bail. Indigent individuals who cannot afford to post bail must sit in jail until their case comes before a judge for a bail hearing. That may cause them to lose jobs or to face claims that they are unfit parents, even if the charges are dropped at the first court appearance.

A nonprofit public interest group known as Equal Justice Under Law (EJUL) has filed a number of lawsuits against jurisdictions that use bail schedules. According to EJUL, bail schedules discriminate against the poor. When a judge is likely to release a defendant on a recognizance bond, whether the defendant sits in jail awaiting a bail hearing depends entirely upon the defendant’s wealth.

The Supreme Court has long held that the right to equal protection of the law means that courts should not treat poor individuals less favorably than more affluent individuals. Indigent defendants cannot be jailed for failing to pay fines that they cannot afford to pay. In civil cases, courts must waive filing fees for people who require essential services from the court (such as a divorce or child support order).

The EJUL lawsuits contend that the right to equal protection is violated when bail schedules require arrested individuals to post cash without regard to their financial status. One such suit was filed against the City of San Francisco. The EJUL’s lawsuit explains the issue in these terms:

In San Francisco, arrestees face two different outcomes depending on their wealth status,” the lawsuit said. “Wealthy arrestees purchase their freedom by paying an arbitrary amount set by the bail schedule. Poor arrestees must languish behind bars until the resolution of their case, simply because they cannot afford to pay a pre-determined sum of money. The sole criterion determining whether a pretrial arrestee walks free or sits in jail is the amount of money she has.

To his credit, San Francisco’s City Attorney is refusing to defend the city against the lawsuit, having been persuaded that the city’s bail schedule does indeed discriminate against the poor.

Herrera told the press that the bail schedule “creates a two-tiered system: one for those with money and another for those without. It doesn’t make anybody safer.”

One of the few bail schedule supporters is the California Bail Agents Association, which represents bail bondsmen. When defendants are released on their own recognizance, bail bonding companies make no money.

An attorney for the Association accused Herrera and the sheriff of violating their oaths of office by “refusing to do their duty to defend California’s lawfully enacted statutes.” However, Herrera and the sheriff also swore an oath to uphold and defend the Constitution. Since the Constitution trumps local laws, both public officials would be violating their oaths of office if they defended a law that they believe to be unconstitutional.

Several other challenges to bail schedules are pending across the country. Herrera’s refusal to defend a law that discriminates against poor people may spark a nationwide effort to replace automatic cash bail with systems that tailor bail decisions to the circumstances of each individual case.