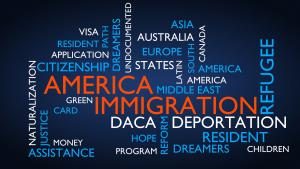 An intense legal battle over the controversial Deferred Action for Childhood Arrivals (DACA) is brewing in federal courts across America, leaving the future of the program uncertain.  As President Trump presses to curb the Obama-era immigration policy, ideologically competing lawsuits originating from both sides of the political aisle have likely put DACA on a collision course with the Supreme Court unless Congress intervenes with clarifying legislation.

The Rise and Potential Fall of DACA

In 2012, Barack Obama worked through the Department of Homeland Security to institute DACA without Congressional involvement.  The program was designed to protect young immigrants — known as Dreamers — who had come to the US as children from being deported if they engaged in productive activities such as work or school.  The DACA program quickly became an ideological litmus test, further polarizing the American public along partisan lines with Democrats offering near universal support and Republicans rebuking the measure as unconstitutional in both the method of its creation and scope.

Shortly after DACA, the Obama administration instituted an extension of the program called the Deferred Action for Parents of America (DAPA) which permitted parents of children born in the US to stay in the country by way of renewable work permits.  DAPA was successfully challenged and blocked by a lower federal court because the President did not follow the rulemaking requirements outlined in the Administrative Procedures Act.  Obama appealed to the Supreme Court arguing that DAPA is not a rule, but an exercise of federal prosecutorial discretion; however, with Justice Scalia’s seat unfilled, the incomplete Court was gridlocked at 4 – 4, effectively keeping DAPA blocked until President Trump cancelled the program officially in 2017.

As Donald Trump has turned his attention to limiting or ending the DACA program, federal courts are hearing cases initiated by both sides which could force Congress to either reshape the program or leave its fate to the Supreme Court.

In late April, Texas Attorney General Ken Paxton — the man who filed the lawsuit to prevent the implementation of DAPA — returned to Judge Andrew Hanen – the federal judge whose ruling blocked DAPA — with a similar lawsuit that seeks to bring an end to the DACA program.

Paxton’s lawsuit is following the same strategy he used four years ago by arguing that DACA is identical to DAPA in its creation and administration and is therefore similarly an abuse of presidential authority to unilaterally enact and administer immigration rules.  Paxton had communicated his intention to file a DACA lawsuit with President Trump but gave the administration time to terminate the program without involvement from federal courts.  The lawsuit was filed before Trump could do that; however, because lawsuits filed by DACA supporters against the President’s plan to dial it back resulted in favorable rulings for the program.

In late April, a federal judge in DC issued the most significant blow to Trump’s efforts to end the DACA protections by ruling that that the administration’s plan to end the program was “virtually unexplained” and therefore “unlawful.”  Judge John D. Bates found Trump’s decision to end DACA, which was in part supported by Paxton’s looming lawsuit, was “arbitrary and capricious” and filled with conclusions that were not supported by evidence.   Bates concluded with a ruling that stated if the government could not come up with a more sufficient justification to end DACA in 90 days, he would order the Department of Homeland Security to not only continue the program but expand it.  Bate’s decision is one of three federal rulings that blocked Trump’s efforts to end DACA.

Paxton’s lawsuit challenging DACA is likely to succeed using the same arguments that blocked DAPA from expanding Obama’s immigration enforcement initiative.  The Texas challenge to DACA, which is joined by six other states, will be heard in front of the same favorable judge who found Obama’s process for implementing DAPA to be unconstitutional.  If that case resolves as expected, the federal circuits will split on DACA’s constitutionality and force the case to the Supreme Court for a final say.  Although it is difficult to predict where the Court will fall, traditional swing vote Anthony Kennedy (who voted against DAPA) and new Justice Neil Gorsuch have a demonstrated history of limiting the authority of the executive branch to act unilaterally through its agencies — which is exactly the legal mechanism Obama used to push DACA into existence.

It is possible the scope and real effects of DACA, which covers several hundred thousand children and young adults who work, attend school, serve in the military, and pay taxes, sways the minds of the Supreme Court in a way DAPA could not; however, it seems like DACA’s best chance at survival is in Congress.  The program has significant public support (a poll found 60% support in Texas), and will be a focal point of the upcoming November Congressional elections, which gives the program a real chance to be enacted by the legislature.  If Congress fails to act, the future of DACA is a precarious one because the legal justification for its creation and administration is probably insufficient for the current Supreme Court.

Supreme Court to Rule on Excessive Fines
How Should You Respond to a Red Light Camera Ticket?
DC Federal Court Upholds FCC Net Neutrality Rules
How Can the Independence of Immigration Judges Best Be Assured?