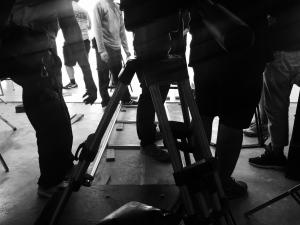 The California Court of Appeal recently ruled that offensive and derogatory language used on a movie set is protected under the state’s anti-Strategic Lawsuit Against Public Participation (or anti-SLAPP) statute.

The case of Daniel v. Wayans was brought by Pierre Daniel, an actor who worked as an extra in the movie A Haunted House 2. Marlon Wayans co-wrote, produced, and starred in the movie.

Daniel claimed that he was the victim of racial harassment during his one day of work on the movie because, according to the court’s decision, Wayans (who is black) compared Daniel to the black cartoon character “Cleveland Brown” from the show Family Guy, and called him “[n]igga.”

Daniel also claimed that Wayans made “demeaning, abusive, and derogatory comments and gestures” and posted a photograph of Daniel on Twitter without his consent.

The complaint included 13 causes of action, including:

Wayans moved to strike the claims against him as a SLAPP suit, saying that the claims

arose from Wayans’s constitutional right of free speech because the core injury-producing conduct arose out of the creation of the movie and its promotion over the Internet.

The trial court agreed with Wayans and entered judgement in his favor.

Daniel appealed. He claimed that the lower court was in error because the offensive conduct wasn’t part of the “creative process” inherent in making a film because it happened when the cameras weren’t rolling.

on-set improvisation, including “[j]oking around,” constituted a key part of the creative process both in A Haunted House 2 and in his other movies, as the scripts for those movies were often just an “outline of scenes.” To demonstrate the improvisational nature of the movie’s creative process, Wayans submitted the certified transcript of three different “takes” of the scene in which Daniel appeared; in each of those takes the action is the same—Wayans’s character calling Daniel’s character to help get a heavy safe off of his dog—but the dialogue is markedly different each time as Wayans experiments or improvises.

Wayans also claimed that Daniel posed for the photograph at issue and allowed it to be taken.

The court found that Wayans’ alleged misconduct was based on his exercise of free speech — “the creation and promotion of a full-length motion picture, including the off-camera creative process.”

The court found that Daniels had waived other claims by signing a broad release form allowing the use of his image in connection with promoting the movie.

The case is potentially a bad precedent for anyone claiming racial or sexual harassment in a creative environment — such as a television writer’s room.

Palantir Claims Victory in Lawsuit Against US Army
Newtown Gun Case Goes to State Supreme Court
US Companies Sued for European Privacy Law Violations
Can You Sue Because of a Negative Review?