Can Merchants Be Punished For Calling Higher Prices For Credit Card Purchases A “Surcharge”? 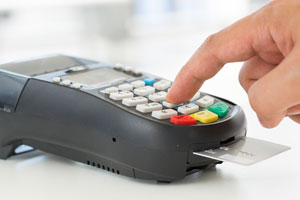 In both cases, you pay $103 if you pay by credit card but only $100 if you pay with cash. Yet having to pay a surcharge might make you mad enough to pay cash, while you might be willing to pass up a cash discount in exchange for the convenience of using your credit card.

Recognizing that the characterization of the price difference as a “surcharge” or a “discount” affects the behavior of consumers, credit card issuers have persuaded some states to prohibit merchants from using the word “surcharge” when they charge more for credit card purchases. In those states, merchants are required to tell you that you are receiving a cash discount rather than saying that they are adding a surcharge for credit card use — even if it would be more accurate to tell you that the merchant is imposing a surcharge.

Some merchants contend that those laws are unconstitutional. The Supreme Court has agreed to hear their complaint.

When you purchase products with your credit card, the merchant must pay a “swipe fee.” The fee, typically a percentage of the purchase price, is imposed to cover the cost of processing the credit card transaction.

At one point, credit card companies made it a condition of their contracts with merchants that the merchants could not charge customers more for using a credit card. Congress responded by enacting a law that gives merchants the right to charge two prices, one for cash purchases and the other for credit card purchases.

As a result of that law, merchants can choose to absorb the cost of a “swipe fee” or to pass it on to credit card users. When they charge customers more for using a credit card, there are two ways that merchants might characterize the added cost. They might tell consumers that they are adding a surcharge to the purchase price when payment is made by credit card, or they might say that they offer a discount to consumers who pay in cash.

Credit card companies tried to enter into contracts that required merchants to refer to price differences as cash discounts rather than credit card surcharges. Visa and Mastercard abandoned that practice after being sued for antitrust violations. They then turned their attention to state legislatures.

In response to the lobbying efforts of credit card issuers, ten states, including New York, have passed laws that regulate the way merchants market their strategy for passing along the cost of swipe fees to consumers. In those states, merchants must tell consumers that they offer a cash discount rather than saying that they impose a surcharge on credit card purchases. Telling consumers that they are being assessed a surcharge for paying by credit card is a crime in New York.

A pharmacy, a hair salon, and other businesses sued government officials in the State of New York, claiming that its no-surcharge law violated their First Amendment right to freedom of speech by prohibiting them from referring to a surcharge as a surcharge. The Supreme Court recently agreed to resolve conflicting court decisions by deciding whether states can tell merchants how to characterize their decision to charge a higher price when payment is made by credit card.

The merchants described the impact of the New York law in these terms:

The merchants argue that they cannot be punished for telling customers the truth. They contend that their First Amendment right to freedom of speech includes the honest communication of facts to their customers, even if credit card companies would like to suppress the truth by forcing them to characterize the cost difference as a cash discount rather than a credit card surcharge.

The merchants point to a case from a New York state court that vacated a conviction imposed on a gas station retailer who told a customer that it would cost “five cents extra” to pay by credit card rather than saying it would cost “a nickel less” to pay by cash. The court said that the merchant was not being punished for having a dual-pricing scheme (those are perfectly legal), but for failing to describe that scheme in the way the law required. Punishing the retailer’s honesty was something the court refused to tolerate.

The federal district court judge who decided the merchants’ lawsuit agreed with the New York judge. The federal judge concluded that New York’s law regulates speech because it does not tell merchants how to set their prices but only how to communicate those prices to customers. The court decided that the law violated the merchants’ right to free speech by penalizing them for telling the truth about their desire to pass along credit card swipe fees to their customers.

Why the Case Matters

Legislatures can regulate commercial speech (such as advertising) to assure that it is not false or misleading. The merchants contend that no-surcharge laws go well beyond that legislative power by punishing a merchant’s truthful statement that it charges more for credit card transactions because it required to pay swipe fees.

Will a Young Lawyer Take Down Amazon?
Is It Illegal for Job Ads to Target Younger Workers?
US Justice Department Sues to Block AT&T-Time Merger
Why Companies Like to Go Bankrupt in Richmond, Virginia
Federal Court Orders Winn-Dixie to Make Its Website Accessible to Visually Impaired Customers
Companies Open Data Centers Abroad to Comply with Cybersecurity Rules
Google Fined a Record $2.7 Billion in Europe
Indiegogo Brings Crowdfunding to Startup Investments
Court Says Customers Can Sue For Data Breaches
Don’t Ignore the American Disability Act When Designing a Site for Your Business