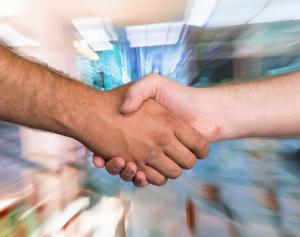 Handshakes are usually a sign of friendship or respect. Aggressive handshakes, however, have been known to spur legal action. The most recent example of a lawsuit for injuries that allegedly resulted from a handshake is scheduled for trial in Palm Beach, Florida. The story has been widely reported, sometimes with derision.

George H. Vallario, Jr., 76, shook hands with Peter Lindley at a children’s birthday party in Boca Raton. Vallario and Lindley are both lawyers and, at least at the time of the party, were friends.

Vallario alleges that Lindley squeezed his hand too hard during the handshake, causing severe pain.

“I screamed, ‘holy cow!'” recalled Vallario, who said he might not have sued had Lindley just apologized.

Vallario, a retired criminal defense attorney, contends that he still has pain in his hand. He expects to support his claim for damages with expert testimony from his treating physicians, including an orthopedic surgeon and arthritis specialists.

Vallario is seeking $100,000 “or as much as I can get” for pain and suffering. Lindley, a business lawyer, denies that he caused Vallario any injury. Nevertheless, the moral of the story is that an apology, whether merited or not, is often the best way to ward off legal problems.

Comments to the story on news and opinion sites are divided. Some commenters see the story as an example of frivolous litigation or take the opportunity to express their disdain for lawyers. Others see it as an example of elder abuse. Of course, none of the commenters witnessed the handshake and none have had an opportunity to hear the evidence. In the end, the only opinions that matter will be those of the jurors who determine the verdict.

Almost any act of carelessness that injures another person can give rise to a negligence claim. Most negligence lawsuits are based on traffic accidents, unsafe premises, medical malpractice, or defective products, but suing for a negligent handshake is not unprecedented.

In 2008, a woman sued the manager of an Applebee’s in Oak Ridge, Tennessee for giving her a painful handshake. In 2001, an elementary school teacher in Salt Lake City sued a parent for giving her an angry handshake during a parent-teacher conference.

Boys often learn from their fathers that a firm handshake is a sign of reliability or masculinity. Some men deliberately or unintentionally turn “firm” handshakes into “bone-crushing” handshakes.

In some cases, it is difficult to tell the difference between an intentional act and one that is careless. If a crushing handshake is intended to cause pain, civil law would probably classify the handshake as the intentional tort of battery. People who intend to cause harm are responsible for the consequences, even if the harm turned out to be greater than they intended. On the other hand, a person who doesn’t know his own strength would be guilty only of negligence if the bruising handshake was not meant to cause harm.

From a legal perspective, intent is important. If the person who caused the injury intended to cause harm, the victim can probably sue for punitive damages in addition to the damages that would otherwise be awarded (medical expenses and compensation for pain and suffering). Punitive damages, which are designed to punish intentional misconduct, are rarely available in a negligence case.

On the other hand, many people are insured against negligence. In some cases, homeowner’s insurance might cover the consequences of a negligent handshake that causes injury. Insurance policies almost never cover intentional acts that cause a physical injury.

Whether handshake pain was caused intentionally or negligently may therefore have an impact on the victim’s ability to recover damages, as well as the amount that might be recoverable. Still, the best way to guard against liability is to go easy on the handshake.

What You Need to Know Before Visiting a Website
Google, Facebook, and Twitter Sued by the Families of the Orlando Shooting Victims
Steve Harvey Speaks Out Against NASCAR Lawsuit for Racial Discrimination
Office Lotto Pool Disputes Shaping a New Area of Law