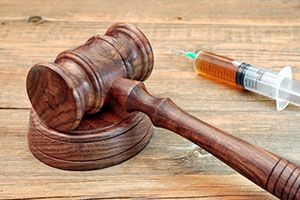 Just a few months ago, in a 4-3 decision, the Arkansas Supreme Court rejected a challenge to the state’s death penalty statute. Opponents of the law claimed that it failed to provide a specific procedure for administering a lethal injection and therefore gave too much discretion to state officials. A similar argument persuaded the state’s highest court in 2002 to strike down an earlier version of the lethal injection law. The new law, according to the court’s majority, does not improperly delegate authority to prison officials to decide how the death penalty should be administered.

That decision seemed to open the door for the execution of eight Arkansas prisoners on death row. The court shut the door again this week by granting a stay of those executions while death penalty opponents challenge a separate law that prevents the state from identifying the supplier of the drugs it will use to carry out the lethal injections.

Most states use a three-drug cocktail to administer lethal injections, a procedure that the United States Supreme Court approved in 2008. One of those drugs, an anesthetic called sodium thiopental, is in short supply. Texas has 317 inmates on death row but only has enough sodium thiopental to execute two of them. Ohio only has enough of the drug to execute one prisoner.

The only American manufacturer of sodium thiopental recently announced that it will stop making the drug. Manufacturers outside the United States, responding to a European Union embargo, are refusing to sell sodium thiopental to American states for use in executions. The worldwide campaign to prevent American states from killing the condemned has nearly halted executions as prison officials scramble to find a replacement drug. Attempts to change execution procedures (by substituting different drugs or, in the case of Utah, using a firing squad) have been met with a host of new legal challenges.

The number of states in which death is a potential penalty for murder has declined in recent years. Nebraska abolished the death penalty this year. Other states that have recently abandoned the death penalty include Maryland (2013), Connecticut (2012), and Illinois (2011). In this century’s first decade, three other states either voted to rescind their death penalty statutes or failed to enact new statutes after courts found the existing laws to be unconstitutional.

Of the 31 states that still have a death penalty, executions have been halted in at least ten. Some states have imposed a death penalty moratorium while capital punishment or lethal injection procedures are being studied. Courts in other states have suspended executions until they resolve legal challenges to capital punishment laws, including the replacement of sodium thiopental with drugs like midazolam.

A recent analysis of executions published in USA Today suggests that the death penalty may be on life support. A number of factors have influenced the erosion of support for capital punishment, including:

While all of those factors have contributed to the declining support for capital punishment, the fact that 155 innocent prisoners have been released from death row in the last 42 years has probably been the key to the impending death of the death penalty. The risk of killing an innocent defendant may explain USA Today’s finding that juries are increasingly unwilling to vote in favor of death, even in cases involving heinous murders and multiple victims.

The legal challenge that caused the most recent stay of executions in Arkansas concerns a law that prohibits the state from disclosing its source of drugs that are used in lethal injections. Death penalty opponents argue that they cannot determine whether the drugs will produce a cruel and unusual punishment without knowing who manufactured the drugs and their chemical composition.

The challengers also argue that the state settled an earlier lawsuit by promising to disclose that information to inmates. Remarkably, the state contends that the settlement did not constitute a “binding contract.”

A law that prevents the public from learning how public funds are spent is contrary to sound public policy. Open government is a check against corruption and abuse. No matter how Arkansas voters feel about the death penalty, they should question a law that prohibits disclosure of information about drugs that the state is purchasing with their tax dollars.