Are Your Christmas Lights a Public Nuisance? 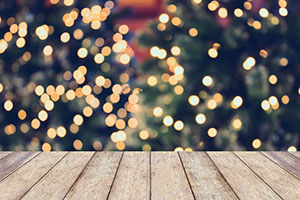 In some neighborhoods, substantial Christmas displays on the outside of homes are common. North Carolina’s McAdenville promotes itself as “Christmastown USA,” thanks to the abundance of homeowners who string Christmas lights on their homes and trees, while erecting yard displays of happy Santas and festive reindeer. Other neighborhoods vying for the honor of having the best Christmas lighting can be found in cities that span the country.

Lighting displays that entertain some people might disturb others. What if your neighbors think your Christmas displays are gaudy or complain that they can’t sleep at night because your lights are too bright? Do they have a right to tell you to turn off your Christmas lights? Can a court intervene if neighbors can’t agree about Christmas lighting?

The City of Plantation, Florida sued Mark and Kathy Hyatt, claiming that their Christmas display constituted a public nuisance. The city argued that the Hyatts went too far by erecting a display that included “more than 200,000 lights, a movie screen, snow, a 30-foot-tall tree and even a Ferris wheel for stuffed animals.”

The display attracts a large group of visitors each December. The Hyatts open a gate to the display during evening hours from the day after Christmas until December 23, inviting pedestrians to enjoy the attraction. They turn off the lights at 10:00 p.m. on weeknights and 11:00 p.m. on weekends.

The Hyatts’ home is located on a cul-de-sac on a short street with seven other homes. The street intersects with, and can only be entered from, Old Hiatus Road, a two-lane thoroughfare. Most of the Hyatts’ neighbors like the holiday display, but some vocal neighbors have persistently complained to the city about it.

According to the city, the display creates a threat to public safety by causing increased traffic and congestion. When the Hyatts refused to tone down the display, and in fact added to it each year, the city finally sued the Hyatts for creating a public nuisance.

The Hyatts countered that the city was trying to interfere with their religious freedom. However, assuming that the city would take the same position with regard to any property use that increases vehicular and pedestrian traffic on a public street, the Hyatts’ claim of religious persecution is weak.

They also argued that the attempt to restrain their display violated their property rights. That argument resonated with the judge who decided the case in favor of the Hyatts.

Like most states, Florida defines a “nuisance” as an activity or condition that substantially interferes with another landowner’s use and enjoyment of his or her property, if ordinary people would also be bothered or annoyed by that condition. If your neighbor begins to raise pigs on a residential lot, the neighbor is probably creating a nuisance because the odor that accompanies a pig farm would bother most reasonable neighbors. On the other hand, mere annoyance with a neighbor’s activities does not constitute a nuisance unless those activities substantially impair the use and enjoyment of another person’s property.

A public nuisance affects an entire community, or at least a large part of it. Cities solve problems like inappropriate pig farming by enacting zoning laws that prohibit certain property uses in residential neighborhoods, but cities can’t zone against every inappropriate use of property. Public nuisances that do not violate zoning laws are usually addressed by nuisance lawsuits filed by a local government on behalf of the community.

The Hyatts’ attorney undermined the city’s argument by pointing out that the Hyatts have erected an elaborate Christmas display for ten years, but not a single person has been injured. The judge accepted that argument, and also pointed to the lack of evidence supporting the city’s claim that traffic might hamper emergency services vehicles if one decided to use Old Hiatus Road on a December evening.

In its attempts to control traffic, the city erected “No Parking” signs on Old Hiatus Road, and then shut down a portion of the road completely to create a “safe zone” for pedestrians. That strategy backfired when the judge ruled that the city couldn’t blame the Hyatts for city actions that only worsened the traffic problem. The city also hurt its own cause when it decided that visitors could not park in vacant lots, an action that exacerbated the congestion problem by forcing visitors to walk a greater distance after parking their vehicles.

According to news reports, some neighbors have complained that visitors leave trash on their lawns. Perhaps the neighbors could bring private nuisance lawsuits against the Hyatts on that basis, although it isn’t clear that a court would hold the Hyatts responsible for the rude behavior of people who use the sidewalks. In any event, the city did not prove that any trash accumulated on neighboring property. Given the absence of any harm to the community, the judge ruled that no evidence established the existence of a public nuisance. As a result of that ruling, the Hyatts are free to continue their Christmas displays.

Is It Legal to Use Someone Else’s Code?
New Jersey Settles Lawsuit and Agrees to Let Driver Get “8THEIST” License Plate
Who Should Be Responsible for Driverless Car Accidents?
Is Airbnb Responsible for Property Rental Discrimination?